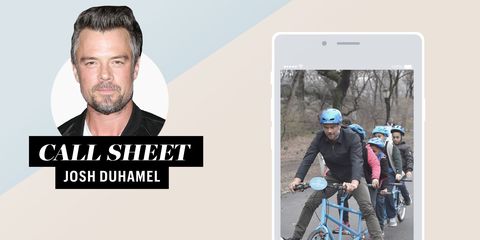 Ever wondered what's on your favorite celebrity's phone (ya know, in a non-weird way)? MarieClaire.com teamed up with Josh Duhamel to unlock some cellular secrets, and got details on the actor's personal texts, most random screen grabs, and even his lock screen photo. Let's collectively swipe right, shall we?

What was the last random thing you screen-grabbed? "A photo from my #BeAnOutsider Claritin campaign of me sitting naked on a park meditating in Griffith Park, California."

What was the last text you sent? "To my dad, letting him know I was going to be on Fox & Friends this morning riding a five person bicycle."

What's the oldest photo on your phone? "Oh god, there's like 8,000 photos on my phone. I have photos of me as a child. Let me look here. Wait, it's me holding my son in a pool when he was three months old."

The newest? "Me on a five person bike rolling down the streets of New York City!"

What's the most high profile number in your phone? "Aaron Rodgers. And I'm not even a Packers fan. But I like the guy."

Your most played song on Spotify? "The songs I probably listen to the most are 'Tennessee Whiskey' by Chris Stapleton and 'Neon Moon' by Brooks & Dunn because they're like lullabies for my son."

Who was the last person you called? "It was my wife."

What was the last thing you Google searched? "I hadn't seen the website for the #BeAndOutsider campaign yet—and I wanted to see how it looked. And I'm going to post a photo of me doing something crazy outside and use the hashtag—because every time anyone does that, Claritin is making a donation to Boys & Girls Club!"

What do you have filed away in notes? "I'm going to be directing a movie this summer, and we're in pre-production—so mostly notes about script changes, song ideas, shot ideas, other movie references to inspire me—I keep a long list of that."

What's your phone's lock screen photo? "It's my boy. Playing in the great outdoors!"

What was the last thing you bought using your phone? "Probably Moana on iTunes." [Edit note: cutest response ever?]

Mehera Bonner Contributor Mehera Bonner is a news writer who focuses on celebrities and royals—follow her on Instagram.
This content is created and maintained by a third party, and imported onto this page to help users provide their email addresses. You may be able to find more information about this and similar content at piano.io
Advertisement - Continue Reading Below
More From Celebrity
The Queen Was by Prince Philip's Side When He Died
Prince Harry Is "Really Upset" Over Philip's Death
Advertisement - Continue Reading Below
Will Harry & Meg Attend Prince Philip's Funeral?
The Queen Is Hopeful Prince Harry Will Return Home
Prince Charles Visits the Queen at Windsor Castle
Harry & Meghan React to Prince Philip's Death
Prince Philip Will Not Have a State Funeral
What 'The Crown' Got Wrong about Prince Philip
Touching Things Queen Has Said About Prince Philip
Your Guide to the Current Royal Line of Succession