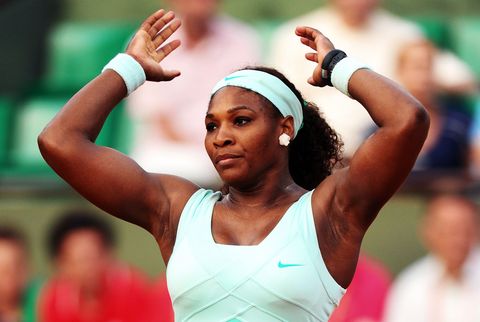 There are many ways to react to the news that tennis god Serena Williams is pregnant, such as with delight. Or with awe, that she managed to win the Australian Open while 10 weeks along. A less acceptable way is to publicly opine about what color the baby will be, as Ilie Nastaste did last week.

Over the weekend, Nastase, a Romanian tennis legend who peaked in the 1970s, allegedly said of Williams' pregnancy, "Let's see what color it has. Chocolate with milk?" He seemed to be referring to the unborn child's skintone, as Williams is black and her fiancé, Reddit co-founder Alexis Ohanian, is white.

The International Tennis Federation immediately decried the comments, saying: "The ITF does not tolerate discriminatory and offensive language and behaviour of any kind. We are aware of alleged comments made by Romanian captain Ilie Nastase and have begun an immediate investigation so that we have the full facts of the situation before taking further and appropriate action."

"I am not afraid unlike you. You see, I am no coward," Williams says, before quoting Maya Angelou's famous poem, "Still I Rise."

Kaitlin Menza Kaitlin Menza is a freelance features writer.
Advertisement - Continue Reading Below
More From Celebrity
How Goop's Vagina Candle Came to Be
Kim and Kourtney Throw Punches in New 'KUWTK' Clip
Advertisement - Continue Reading Below
Selena Spent Weekend Helping Solve a Murder Case
JFK and Jackie Kennedy's First Year of Marriage
Kate and William Dress Up for Dear Evan Hansen
Kobe Gave His Vanessa a Dress From 'The Notebook'
Will There Be a 'Bachelor' Spin-Off for Seniors?
Beyoncé and J.Lo's Nail Art Tribute to Kobe
Demi Lovato's Gorgeous No Makeup Selfie
Kate Middleton’s Brother Is Making a Documentary