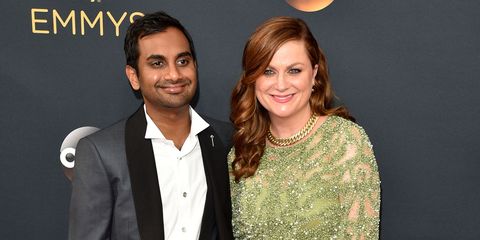 Aziz Ansari is the latest celebrity to take part in Vogue's 73 Questions series and the actor/writer/comedian/Netflix show creator had a lot to say—particularly for Parks and Rec fans.

Early in the interview, Aziz revealed his best Amy Poehler story and, even though it's barely about Amy Poehler at all, it's so wonderfully weird that we're going to give it to him.

"Her kids always call me turkey sandwich," he shared. Of course, this raises more questions than it answers because now we need know the story behind that nickname.

Aziz also brought back the Parks and Rec love in a later question. A Reddit-user asked if Aziz would rather fight 100 duck-sized horses or one horse-sized duck. His answer?

"One horse-sized duck, but Lil' Sebastian from Parks and Rec has to have my back."

Aziz also revealed the fashion trend he'd bring back ("Sweatpants with the words on the butt, but you integrate it into protest culture so it's like, #JoinTheConversation") and who he'd like to play him in a movie.

"Hopefully I'd get the part, but I feel like with the way things are going, it'd probably be Dev Patel or Riz Ahmed," he said.

Watch the whole video below: