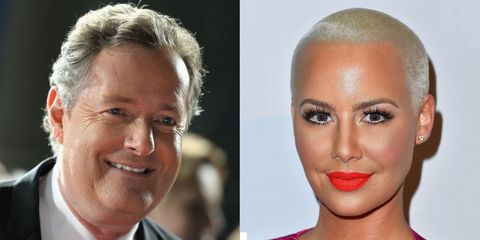 In case you missed the internet breaking this weekend, Amber Rose released a nude photo to promote her annual Slutwalk. Annnnnd surprise, surprise: professional troll Piers Morgan was aghast at the sight of a woman's pubic hair, and told her to put "it" away. (Ummm, it?! Check your language, buddy.)

Put it away, luv. Thanks. https://t.co/aZcTyLdvrJ

First of all, Amber Rose is not Morgan's "luv." Second of all, it's not his job to police a woman's body—so naturally, Rose fired back. And even more naturally, Morgan refused to apologize.

It's not 'misogyny' to think that posting nude photos in the supposed name of feminist empowerment is pathetic attention-seeking bulls**t. https://t.co/39rIjaaUXu

Clearly, Morgan has never looked up the definition of "misogyny," because he became very confused and needed to be put in his place.

Nude? Where? My breast nor my vagina was showing and my legs were closed 🤔 https://t.co/ZD0dZzwAWc

I am assuming you are referring to the pubic hair that was shown in the picture. Uncomfortable? Get over it. https://t.co/ZD0dZzwAWc

After this round of tweets, Morgan made it clear that he can "handle" Rose's naked body (cool, good to know), but finds nudity in the name of feminism a sham. Because in case you aren't aware, Piers Morgan is the sole person on the internet who gets to define feminism!!!

I can handle your naked body, Amber - relax.
I just can't handle your ridiculous claim to be stripping off in the name of feminism. https://t.co/i0bAqNKbB1

Talking of idiots, can't you think of a less dumb way to promote feminism than getting your kit off? https://t.co/FHnb6CLXaF

Rose then whipped out this picture to expose Morgan's double standard, and sadly he still failed to understand how insanely sexist he is.

No, that was @adamlevine raising awareness for a UK prostate & testicular cancer charity. https://t.co/sNak1T8aWR

Smh I raise awareness for my foundation as well Piers. That's like saying breast cancer awareness is cool but what about HIV and AIDS 🤔 https://t.co/1AaoabZo3f

At this point Morgan tweeted a semi-nude photo of himself promoting Burger King, which gave Rose an opportunity to pretty much shut the conversation down.

So you got naked for a Burger King check and ur giving me a hard time? Foh 😂😆😩 https://t.co/0RSK2OEN5S