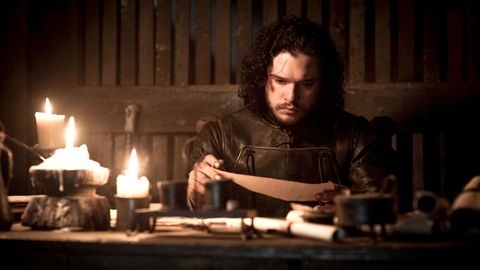 We are mere days away from the moment Game of Thrones fans have been waiting for. On Sunday's episode, Jon Snow and Daenerys Targaryen are posed to (FINALLY) meet.

This is Westeros though, and there's no email or text, so Jon's invitation to meet with Dany came via raven, in the form of a personal letter from Tyrion Lannister, the Hand of the Queen.

HBO recently released pictures of the collection of letters sent in the episode, "Stormborn," which means fans got the chance to examine Tyrion's letter to Jon up close—and there's a very important detail missing from it.

If you're having trouble reading Tyrion's medieval handwriting, here's what the letter says:

Queen Daenerys Targaryen, First of Her Name, invites you to Dragonstone. My queen commands the combined forces of Dorne and the Reach, an Ironborn fleet, legions of Unsullied, a Dothraki horde and three dragons. The Seven Kingdoms will bleed as long as Cersei sits on the Iron Throne. Join us. Together we can end her tyranny. I appeal to you, one bastard to another — for all dwarves are bastards in their fathers' eyes.Tyrion Lannister Hand of the Queen

The missing element: Dany specifically said she was inviting Jon to come to Dragonstone and bend the knee—AKA surrender the North to her rule. Since the North currently considers itself an autonomous kingdom (of which it has named Jon king), that might be a huge problem.

As io9 points out, it's possible that the prop is just inaccurate and that the detail about bending the knee was added to the script after it was created. But, given the attention to detail HBO typically exercises when it comes to Thrones, that honestly seems unlikely.

More likely? Tyrion purposefully omitted that detail to get Jon to agree to make the trip to Dragonstone. The only problem, of course, is that things could get messy quick when Jon shows up and doesn't bend the knee, which he can't possibly be planning to do.

This meeting just got even more interesting.