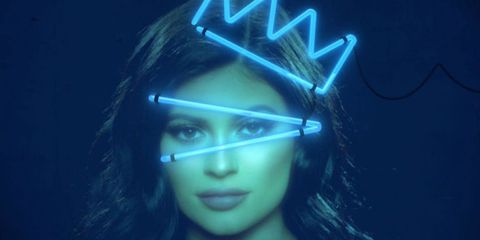 Life of Kylie is a barely-coherent mess, like what you would get if you let an elementary school student take all of Kylie Jenner's social media accounts and interviews and cut them up and paste them back together in a collage for a school project. And here's the thing—that might actually be on purpose?

I mean, it's probably not, and even if it is, I'm not sure if it that means it's good, but I can't tell and it's making my head hurt a little.

There are two ways to read Life of Kylie. Either it's a confirmation of all the worst things Kylie's critics (Kritics?) have ever said about her or it's an attempt on a statement about the blatant artifice of modern celebrity.

In the two-part premiere, Kylie muses on the nature of her own fame. She talks about how she hates having her picture taken and being famous in between selfies and Snapchats. She says she wants to attend a normal prom, but then immediately asks security to take her and her date somewhere private (essentially requesting a makeshift VIP area). She says she relates to outcasts because she is an outcast—by virtue of her inability to relate to normals.

She admits to trolling her own Instagram comments and to deleting pictures that get too much negative feedback. She literally kisses a selfie for garnering three million likes. Kylie is invested in the Kylie brand. She claims to dislike her fame and inability to live a "normal" life, but she also owns up to the role she plays in cultivating and maintaining her own celebrity—sometimes in the same breath.

The purpose of the show, according to Kylie, is to show fans the "real" her, as opposed to the version of herself she feels pressured to maintain on social media. Life of Kylie presents a young woman who is acutely aware of her brand and her, well, fakeness. She claims to want to be the Real Kylie, but nothing about the Kylie on the show seems so different from the Kylie on Snapchat or Instagram. Does Kylie actually want to be real or is "wanting to be real" just part of the Kylie brand? Does Kylie even know at this point?

And, if she knows (or knows that she doesn't know, which is kind of knowing in a way—oh god the paradoxical, circular logic of this show has infected my brain), is she challenging her fans to parse that out for themselves? Or is she really just a 19-year-old girl whose biggest problems include feeling guilty for not driving her Lambo enough?

"I try to force myself to take the Lambo" #LifeofKylie I thought this was supposed to show a different side pic.twitter.com/RqLgxnx8sH

And the contradictions don't just flow from Kylie's mouth, by the way. The editing of the show, which feels weirdly disjointed, not unlike an Instagram Story, and E!'s onscreen promotions also contribute to the general cloud of confusion. During what's intended to be a serious moment near the end of the second episode, with Kylie and her best friend, Jordyn, walking on the beach and discussing their own fleeting fame, E! flashes a neon advertisement for fans to "join the party" by using the #LifeofKylie hashtag. It's a reminder that this is all fodder for the real vehicle of its star's fame: social media.

Kylie claims to want to find herself, the old her, the silly her that used to post hilarious Vines and make weird faces and be REAL. Presumably, that's what Season 1 of Life of Kylie will be about. And, honestly, it would be great if she succeeded. I, for one, had all but forgotten that another Kylie ever existed, after so many years of pouty selfies and Snapchat filters.

If the preview for the rest of the season is any indication, however, we may only be in for more of the same string of contradictions—like when Kylie gets ready for the Met Gala one moment and then professes her desire to live on a farm with chickens the next. What is your life indeed, Kylie?

Kayleigh Roberts Kayleigh Roberts is the weekend editor at Marie Claire, covering celebrity and entertainment news, from actual royals like Kate Middleton and Meghan Markle to Hollywood royalty, like Katie Holmes and Chrissy Teigen.
This content is created and maintained by a third party, and imported onto this page to help users provide their email addresses. You may be able to find more information about this and similar content at piano.io
Advertisement - Continue Reading Below
More From Celebrity
William Will Suffer "Worst" from Harry's Memoir
Simone's Boyfriend Sent Her the Sweetest Message
Advertisement - Continue Reading Below
Harry's Friends Don't Want to Be in His Memoir
Will & Kate's Modern Approach to Raising George
Meet Simone Biles's Super Supportive Parents
What Happens on Katie's Season?
Bennifer Recreated Their 2002 PDA Moment
Why Harry's Memoir Release Date Has Upset People
The Royals Are Worried About Prince Harry's Memoir
Gabrielle Union Debuted a New, Short Haircut