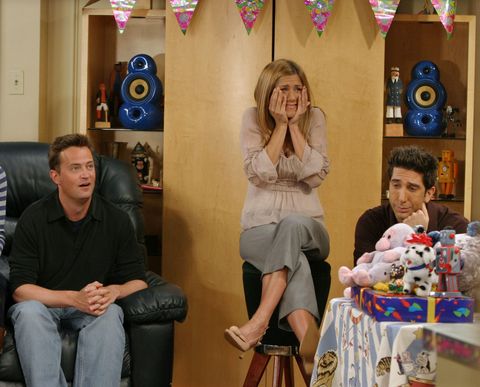 If you've run out of beauty videos, cat videos, and literally everything else the internet has to offer, rejoice! A plethora of Friends bloopers have been lurking around YouTube this entire time, and they are legitimately a *joy* to watch. We've rounded up the best of the best, but fair warning: millions of these things exist, and you will end up in a blooper spiral which could last up to several hours/days. You've been warned.

In Which Matt LeBlanc Falls Over Repeatedly

In Which Matthew Perry Makes His "Sex Face," and David Schwimmer Simply Can't

In Which Matthew Perry and Matt LeBlanc Break Character After Kissing

In Which Cole Sprouse Shades David Schwimmer for Forgetting His Lines

In Which Everyone LOLs Through the Famous "Pivot" Scene

In Which David Schwimmer Walks into a Wall

In Which They All Make Dirty Jokes, Including "You Can't Change Your Name to Banana F*cker"

And Finally, in Which Rachel Can't Get Through the Line: "How Do You Expect Me to Grow, When You Won't Let Me Blow" 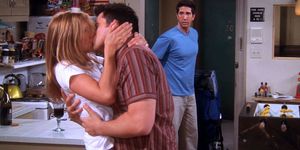 A Feminist Theory on Joey and Rachel

Mehera Bonner Contributor Mehera Bonner is a news writer who focuses on celebrities and royals—follow her on Instagram.
Advertisement - Continue Reading Below
More From Celebrity
47 Really and Truly Adorable Celebrity PDA Moments
Dakota Johnson Rocks Gucci Suit in Milan
Advertisement - Continue Reading Below
The Cast & Director of 'Cruel Intentions' Reunite
Prince Harry Spotted on a Grocery Run in Canada
Kanye West Leaves Kim Kardashian in an Elevator
Channing Tatum Is "Happy" for Jenna Dewan
Inside Chrissy Teigen and John Legend’s Home
A Look at Royal Family Portraits Through the Years
Are The Weeknd's 'After Hours' Lyrics About Bella?
Kendall and Harry Had a Moment At the Brit Awards