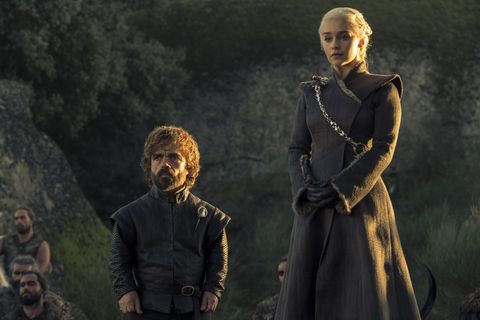 This post contains spoilers through Game of Thrones Season 7, episode 4.

It's almost time for Game of Thrones again and after last week's insane cliffhanger, the fan theory machine has been working in overdrive. Here are this week's fan theories, ranked from least to most likely to come true.

Jaime will turn out to be dead.

This is just SO unlikely. Jaime Lannister is a big enough character to warrant an onscreen death and after his sometimes heavy-handed redemption arc, his death is also sure to be a meaningful one.

Tyrion will go to King's Landing to negotiate with Cersei.

Assuming Jaime doesn't die, there's a good chance Daenerys & co. will take him prisoner (hopefully he won't lose any limbs this time around in captivity). Some fans are speculating that Tyrion will travel to King's Landing to negotiate with Cersei, but I'm not convinced that she wouldn't just have Tyrion executed on the spot, whether that meant losing Jaime for good or not.

If Tyrion does play negotiator with Cersei, my bet is that it all happens via raven.

One of the most controversial moments in last week's episode was when Bronn shot Daenerys' biggest, favorite dragon, Drogon. The wound didn't seem fatal, but some fans are worried about Drogon's future. The giant dragon-slaying crossbow Bronn used to shoot Drogon is called the "scorpion," leading some to believe the arrows are laced with poison. That would be a very Cersei thing to do, but a slow and devastating end for Drogon.

This theory is heating up on Reddit and Thrones sleuths are pointing to evidence from previous seasons and the books that they say supports it.

In the books, Daenerys recieved a prophecy in Qarth that said she would be betrayed three times: once for blood, once for gold, and once for love. As The Independent reports, the prophecy wasn't seen in the series, but the show has still adhered to it so far. Dany was betrayed for blood when the Dothraki witch killd her son to save Khal Drogo. She was betrayed for gold when Ser Jorah was working for King Robert to spy on her. All that's left is love—and that's where Missandei comes in. Some think she might betray Dany for her love of Grey Worm, which would give extra meaning to the sweet moment the couple shared earlier this season.

Reddit user Bisuboy shared an Imgur post that sums up the perceived evidence that Missandei might be the one to betray Dany, and it's pretty interesting.

There's another person in Dany's camp who could betray her for love soon and that's Tyrion. Tyrion has been pretty boring since he fled King's Landing, but he escaped with the help of his brother, Jaime, who he loves very much. Now, Jaime is likely to find himself held prisoner by a queen bent on having him killed and it's not unreasonable to think that Tyrion might return the favor. If he does though, he risks losing all of Dany's favor (especially since his battle strategies haven't been working out so well).

Jon will bend the knee.

Even if Jon doesn't officially bend the knee, he's almost certainly going to follow Dany or at least try to get the North on her side after the battle with the White Walkers. Jon knows that the real end goal is saving his people from the Army of the Dead and that Dany and her three dragons are their best chance at doing that. He'll do what he has to do to gain her support.