If you've lost the ability to use words and can henceforth only communicate in siren emojis thanks to Taylor Swift's new music video rendering you speechless—it's cool: you are not alone.

The pop icon debuted the video for "Look What You Made Me Do" Sunday night at the VMAs, and it is full of symbolism, snakes, and Taylor as a zombie. Because, yeah. 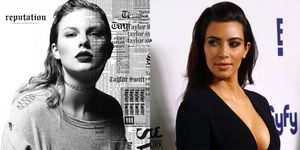 The lyrics to Taylor's song have already been analyzed and then some, but the video hammers home the point that she isn't putting up with anyone's bullshit, she's pissed off, and she's fighting back. Reception to the video thus far is best summarized by "screaming and flailing," but it's also important to note that some people have voiced concern about its similarities to Beyoncé's groundbreaking "Formation."

Mehera Bonner Contributor Mehera Bonner is a news writer who focuses on celebrities and royals—follow her on Instagram.
Advertisement - Continue Reading Below
More From Video Music Awards 2020
Everyone Dressed Down for the VMAs After-Party
Sophie T and T Swift Wanted a Camila/Shawn Kiss
Advertisement - Continue Reading Below
Miley Cyrus' New Breakup Tattoo
Kaitlynn Carter Attended the VMAs with Miley
Bella and Gigi Hadid Both Are Blondes at the VMAs
Taylor Swift Calls Out the White House at VMAs
Camila and Shawn Had a Steamy VMAs Performance
Twitter Reacts to Missy Elliott's VMAs Performance
People Are Roasting Taylor Swift for Her VMAs Act
Halsey Wore Rainbow Roots to the 2019 VMAs