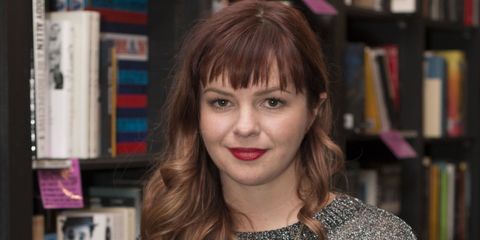 Amber Tamblyn refuses to be silent. Following her revelation that the actor James Woods allegedly hit on her when she was just 16, Tamblyn has written a searing essay for The New York Times, exploring sexism in the entertainment industry. Instead of being hindered by Woods' rebuttal, in which he insisted that the allegations were false, Tamblyn is using her platform to expose a wider problem. Women routinely aren't believed, and that needs to change.

Tamblyn recalls when she was working in television, and a crew member's behavior started making her feel uncomfortable. Tamblyn writes that she went to speak to the show's producer about the issue: "My hands were freezing and I balled my wardrobe skirt up around my fists as I spoke. It was all caught in my throat—my embarrassment that it had gotten to this point. The producer listened." But his reaction wasn't helpful. As Tamblyn recalls, "He said, 'Well, there are two sides to every story.'"

Instead of believing Tamblyn's account, and listening to her genuine concerns, the unnamed producer made her feel as if her worries weren't justified.

Rather than just focusing on incidents in her own life, Tamblyn endeavors to shine a light on all women. As she writes:

As the poet, director, and actor highlights, women are regularly made to feel discomfort, are disbelieved, and are forced to live up to impossible standards. Following Woods's insinuation that she lied about their encounter, Tamblyn isn't prepared to stand by, stay silent, or coddle blame.

Oh just an amazing baby brunch with these Gorgeous Ladies of Feminism. #ItsMyBodyItsMyChoice

And, most importantly, Tamblyn uses her sense of humor to ask, "What would I get out of accusing this person of such an action, almost 20 years after the fact?.. Why would I choose the guy from Scary Movie 2 to help my stature when I'm already married to the other guy from Scary Movie 2?"

Tamblyn has nothing to gain in this situation, apart from the knowledge that she's supported women all over the world, in taking a stand against those that refuse to take our safety, and our needs, seriously. And for that, we're thankful.

Amy Mackelden Weekend Editor Amy Mackelden is the Weekend Editor at HarpersBAZAAR.com, where she writes about entertainment, celebrity news, beauty, and fashion.
Advertisement - Continue Reading Below
More From Celebrity
A Timeline of Charles and Diana's Relationship
Kendall Jenner Wants to Work for Beyoncé
Advertisement - Continue Reading Below
Harry & Jon Bon Jovi Sing Together at Royal Event
Khloé Kardashian Is Being Trolled Over Febreze
Katie Holmes Is in Head-to-Toe Chloé at Their Show
A 'Friends' Reunion Special Is Coming to HBO Max
Ariel Winter Now Has Strawberry Blonde Hair
46 Stars Who Dated Before They Were Famous
Every Easter Egg in Taylor Swift's 'The Man' Video
Kate Middleton Does Some Sports in $38 Sneakers