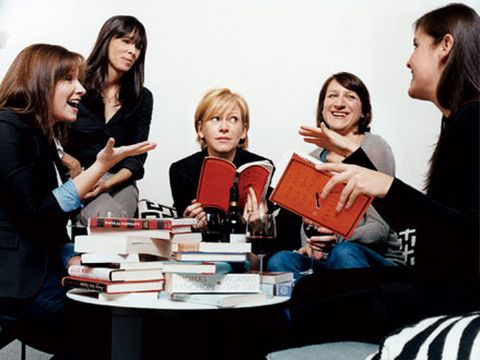 THIS MONTH'S PICK: HIM HER HIM AGAIN THE END OF HIM (SCRIBNER)

SYNOPSIS: A whip-smart American student falls for a pretentious academic named Eugene while studying in the U.K. Like clockwork, he dumps her, leading her to grow comically obsessed with his every move. (Been there?)

YAEL (ASSOCIATE EDITOR): I loved the book because she's this smart woman who falls for the wrong guy and becomes fixated like an idiot. And I see myself—and my friends—in similar situations. I mean, not exactly. But I've had my moments.

LUCY (EXECUTIVE EDITOR): Well, the book does nail this idea that these modern, happening, very capable women can be complete nincompoops in their personal lives. There was something very contemporary and cautionary-tale-ish about it.

SARAH (EDITORIAL ASSISTANT): Ugh. It was just frustrating. I mean, the character's neuroses were endearing at first, but then it was like, enough already . . .

JOANNA (EDITOR-IN-CHIEF): . . . because Marx didn't spend enough time setting up why she was obsessed with Eugene!

LAUREN (ARTICLES EDITOR): Seriously. He was just such an unredeeming douche bag. And I've dated plenty of douche bags, so I know, but Eugene was so over-the-top it was hard to sympathize and I kept waiting for a reason for hanging on.

YAEL: But does it really matter why she likes him? It seems almost irrelevant. It's the idea of being infatuated, regardless. I couldn't explain why I've been into certain men, because it almost had nothing to do with them.

JOANNA: But she's the author. She needs to explain why he is desirable, or else her character's obsession gets boring.

LAUREN: Well, at one point she says that he was able to make a person feel like the most important, most beautiful creature in the world.

JOANNA: So what? They always say that about Bill Clinton. Everybody knows that it's a skill—it's not sincere.

LAUREN: But it doesn't mean it doesn't work! That it wouldn't keep a 22-year-old college student interested. I just think she didn't drive that home.

SARAH: I mean, he had qualifications. He was smart, had a decent resume. But —

YAEL: Well, people do get caught up in the resume when they're dating someone — especially when he seems to have all the qualifications you think are important at that time.

SARAH: I liked it when the character is talking to her friend about Eugene and tells her, "Why do you have to ruin everything with facts?" That to me was the tone of the whole book. She's smart enough to know what's going on but she's willing to delude herself for the sake of the infatuation.

JOANNA: I thought the bit at the beginning where she invites Eugene and his new girlfriend, Margaret, over for dinner — hilarious. Though I've never actually done that exact same thing, I feel like I've almost done it. You know, you do something so ludicrously wrong that, in a weird way, is sort of masochistic. But you really just want to put them on the spot.

LUCY: I starred this bit where the character is trying to justify the fact that she is sleeping with Eugene who, by now, is married to Margaret. So the character's friend asks her about the fact that he's married she responds: "'What does she have to do with it,' I said, and I meant it. I had met Eugene a long time before Margaret had. 'Besides,' I said, 'he seems to really like me this time. 'And, he's so smart. Being with him is getting an A.'" I loved that line. It made me think about that crazy calculus you do in your mind.

LAUREN: He treated me like crap five times, but this time I can tell he really likes me. How many of us have felt not good enough intellectually and tried to compensate by dating someone smarter than us? I mean there's an aspirational thing to dating…

JOANNA: Totally. I couldn't be less interested in someone less intelligent or younger than me.

LUCY: When I was 21, I went out with this Harvard guy who wore these little neckerchiefs. He had a horrible little place in Beacon Hill—but it was very romantic to me. Anyway, he had these oxtail bones on the table, and I said, "What are those?" and he said, "I'm going to make oxtail soup." I mean, oxtail soup? I thought it was so cool. That's Eugenesque stuff right there.

LAUREN: What did you guys think of the parts where Marx pulls back to talk directly to the reader?

LUCY: It was like a poor man's Dave Eggers, who is just a master of that post-modern hyper-self-aware style. And she was trying so hard to be funny and it seems like she was just totally charmed by her own voice so it kind of stayed on the sketch comedy level throughout to me.

SARAH: It felt like when she was done writing the book, she picked up a copy of Dave Eggers's A Heartbreaking Work of Staggering Genius and thought, "Maybe I should throw some of this postmodern stuff in, too." I think this was supposed to be laugh-out-loud funny, but—

LAUREN: Oh, I laughed out loud. A lot.

YAEL: Especially when she blames herself for getting dumped. Remember when she says: "It popped into my head that the problem with him and me was that I had not been nice enough." And how many of us have thought that?

This content is created and maintained by a third party, and imported onto this page to help users provide their email addresses. You may be able to find more information about this and similar content at piano.io
Advertisement - Continue Reading Below
More From Culture
The Best Romantic Films of the Year (So Far)
It's Time To Binge Hulu's Best Documentaries
Advertisement - Continue Reading Below
When Will 'The Crown' Season 5 Be on Netflix?
'The Undoing' Season 2: Everything We Know
Cute Gift Ideas for Every Woman in Your Life
'The Undoing' Differs Sharply From the Book
'The Undoing' Is Packed With Stars
Differences Between 'The Undoing' Book and Novel
It's Been a Weird Year for 'The Bachelorette'
Did Princess Diana Really Dance to 'Uptown Girl'?