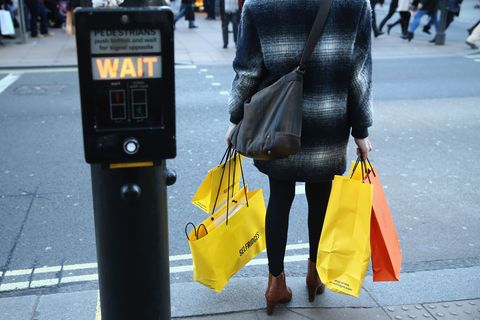 I started shoplifting when I was six years old. One day at a department store in New York City, I dropped a bouncy ball down the waistband of my white tights. I just wanted it so I could beat my brothers at a game of Jacks, but later the things I stole had little to do with want or need.

I would definitely be prettier, or happier, or more interesting If I could just have that lipstick, I thought. Or that book, or that bathing suit. Of course the resulting spiral of guilt and then shame that followed each theft guaranteed I'd never be that prettier, happier girl. But I forged on, thinking each time that maybe this item would be *the* item that would finally unlock the door.

I would definitely be prettier, or happier, or more interesting If I could just have that lipstick, I thought. Or that book, or that bathing suit.

"Shame, for women, is this web of unobtainable, conflicting, competing expectations about who we're supposed to be," Brene Brown, PhD, said in a 2012 TED talk. That's what my life was like—constantly being bounced from the rock of one sucky feeling to the hard place of another. And the whole time I thought I could steal myself away.

By high school, I had found other girls who shoplifted like I did. We went into small dressing rooms and pulled new clothes onto our nervous, sweaty bodies, then stretched our own clothes over the stolen ones. In the midst of these mass thefts, I knew I was on my own, regardless of who had come in with me. Stealing is a solitary event.

I developed my own method. After leaving the dressing room, I did not race for the door. Instead I wandered the aisles, looking at clothing, laying pairs of pants over my arm as if I were still planning to try things on. Sometimes I was even so bold as to walk right up to the cashier and ask her a question.

I was never caught. Which may seem like it would have been a victory for me as a thief—a perfect record dotted with hundreds of smaller victories along the way. But it only intensified my shame. When a thief is caught, her actions are acknowledged. Laid bare. And she can then find ways of redirecting the guilt/shame complex that makes her steal in the first place.

The stolen items themselves weren't my prize—I routinely dropped them in a dumpster behind McDonald's.

Aside from that first rush with the bouncy ball, when I was just six, there was rarely any joy that resulted from my stealing. Only hatred, toward myself. I was a bad girl. I did bad things. The stolen items themselves weren't my prize—I routinely dropped them in a dumpster behind McDonald's. They were only evidence of my compulsion. Evidence of this thing that was wrong with me.

The National Association for Shoplifting Prevention holds support groups for people like me. But Barbara Staib, their director of communications, told me it's difficult just to get people to admit they steal. The shame is so great, she says, that some will say they'd rather be alcoholics. "If I tell my friends and family I was an alcoholic and that I'm now going to AA, they'll be proud of me," she explains of a thief's logic—one I can relate to. "If I tell them I was a thief, they'll hide their wallets and purses."

I stopped shoplifting after I graduated from college. After a decade and a half of thieving, I realized that these items would never be enough to satisfy me. I had grown up enough to see, finally, that the hole inside me couldn't be filled by pilfered lipsticks or that one exhilerating bouncy ball.

That doesn't mean I don't feel the urge, and it doesn't mean I've completely figured out how to grapple with that shame. As Dr. Brown said in that TED talk, "Empathy is the antidote to shame. The two most powerful words when we're in struggle? Me too."

So: Are you a shoplifter? Me too.