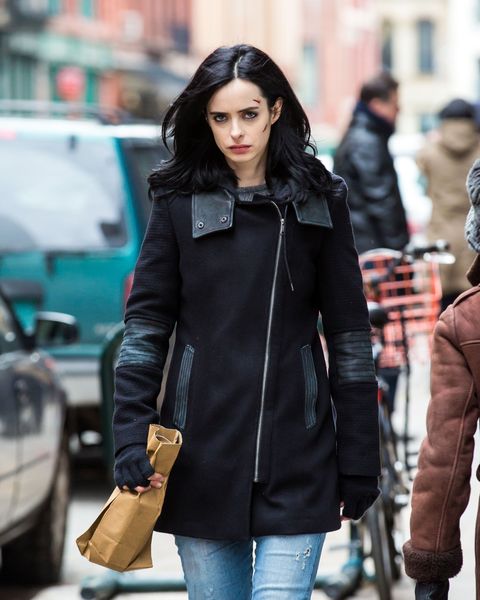 I finished Jessica Jones in about three days, which, believe it or not, is pretty slow considering how obsessively I binge pretty much anything released on Netflix. (Masters of None? Done in 24 hours.) But there's a reason for the (relative) slow pace: Jessica Jones is perfectly timed for a slow build, due, in large part, to the title character. She is a reluctant superhero. She's no savior. Or at least she doesn't want to be.

In fact, Jessica Jones gives us something we very rarely *really* see on TV: a fully realized woman, battle scars and all, without apologies—and without being completely immobilized by the trauma she's endured.

Jessica Jones gives us something we very rarely *really* see on TV: a fully realized woman.

When we meet Jones, she works as a private investigator with an IDGAF attitude. She teams up with a lawyer to get work, exposes her unusual gifts—super strength and flight (or as Jones later describes, "jumping and guided falling")—and uses them to solve cases. It's a pretty standard structure for a procedural show, but even still, Jones manages to break all the rules.

For one, she's complex, and not in TV's more typical "oh look at how charming her complexities make her" kind of way. She's a badass, sure, but she's also soft and scared and emotional and difficult. We don't always empathize with her, but we get her: The times she's tried to be a hero, she's often failed, and the times she just acts as herself—selfish and slightly damaged—she's the most relatable.

She also—*drumroll*—has sex. For fun, for release, for emotional connection. Perhaps the biggest relief in watching this show comes in the fact that the writers don't feel the need to "justify" it—she just has sex. You know, like a normal human. Or like all the men we've ever seen in movies or TV.

She's just a woman who has sex. It's crazy that this is revolutionary.

There's no big build-up about why, and there's no life-altering fallout from it, either. She's just a woman who has sex. It's crazy that this is revolutionary, but ask yourself: When's the last time you saw a woman on screen who had sex and it not result in something terrible or life-changing immediately after? It's rare. For Jones, like all of us, it's a part of life.

Perhaps best of all, Jones isn't a dramatization of womanhood, despite all the superpower stuff. She is a refreshingly normal girl. She's emotional without being melodramatic. She is a survivor of abuse, but she's coping. She, like all of us, just tries to deal with the cards she's been dealt—and in doing so, proves she's more human than hero. But one that we're rooting for.

Samantha Leal Senior Web Editor I'm Sam, the senior editor at MarieClaire.com.
Advertisement - Continue Reading Below
More From Culture
The 83 Very Best Rom-Coms of All Time, Ranked
An Investigation Into the Next 'Bachelorette'
Advertisement - Continue Reading Below
The Best Korean Dramas to Get You Hooked
Who Is 'Bachelor' Contestant Victoria Fuller?
Everything to Know About Peter Weber's Ex
Read an Excerpt From the Uber Whistleblower's Book
The Must-Watch TV Shows of 2020
Candice Marie Woods on Playing Diana Ross
45 Iconic '90s Movies to Binge-Watch Right Now
You Can Get a ‘Golden Girls’ Birthday Party Kit