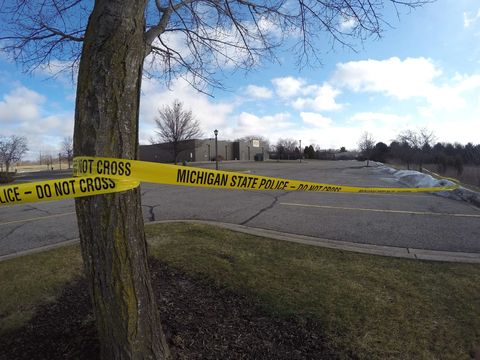 Six people were killed, and two others seriously injured in a string of seemingly random shootings in Kalamazoo, Michigan on Saturday night. The suspected shooter, a 45-year-old Jason Brian Dalton, was taken into custody Sunday. Dalton reportedly has no criminal record.

"There is no connection between any of [the victims]. This all appears to be random," Kalamazoo County Undersheriff Paul Matyas said on Sunday. "In summary what it looks like is we have somebody just driving around, finding people, and shooting them dead in their tracks," he added during a broadcast on NBC's local affiliate, WOOD-TV.

The violent rampage took place at three different locations over the course of six hours. According to Michigan State Police, the first incident occurred at approximately 6 p.m. in an apartment complex parking lot where a woman had been shot multiple times. The second took place at a car dealership around 10 p.m.—the victims were a father and son, both shot and killed. The final shooting occurred about 20 minutes later outside a Cracker Barrel restaurant. Dalton approached an Oldsmobile mini-van and a Chevrolet Cruze, shooting and killing the 62-year old driver of the Oldsmobile, as well as four of the five occupants of the Chevrolet. The fifth occupant, a 14-year-old girl who was sitting in the front passenger seat, is currently in critical condition.

Reports emerged on Sunday indicating that Dalton is a driver for Uber and may have picked up passengers in between attacks.

"Several people have said that Dalton was their driver for Uber." WWMT reports. "We have also found that someone had an experience with him during an Uber ride yesterday."

The following screenshots were posted by Facebook user, Megan Knight:

"Dude who went on a shooting spree happened to be an Uber driver. And picked my sister up from Olive Garden and brought her to my house just last week on vday!"
Facebook
"Yesterday at 11:13pm he was Ubering and getting ready to pick up my Friend Carmen. She canceled because they decided they were not  ready to go out right then. Thank god!"
Facebook

"We are horrified and heartbroken at the senseless violence in Kalamazoo, Michigan. Our hearts and prayers are with the families of the victims of this devastating crime and those recovering from injuries. We have reached out to the police to help with their investigation in any way that we can."

According to Sullivan, Dalton passed his background check for the ride-sharing company. Police will be investigating Dalton's "connection to Uber and whether or not he was picking up fares in between the shootings," said Public Safety Chief Jeff Hadley.

Officials are unclear as to the reason behind what they see as "senseless, random violence."

"We just can't figure out the motive," said Hadley. "There's nothing that gives us any indication as to why he would do this or what would have triggered this. The victims did not know him, he did not know the victims."

Kalamazoo County prosecutor Jeff Getting says formal charges will be brought against Dalton on Monday.

"I would expect six counts of murder, two counts of assault with intent to commit murder, six counts of felony firearm, and then we'll see from there."

Jason Brian Dalton
AP
Sarah Lindig Senior Digital Editor, Special Projects Sarah Lindig is the senior digital editor, overseeing special projects for Harper's Bazaar.
This content is created and maintained by a third party, and imported onto this page to help users provide their email addresses. You may be able to find more information about this and similar content at piano.io
Advertisement - Continue Reading Below
More From Culture
The Best Lesbian Movies Streaming on Netflix
Listen to the Best New Love Songs of 2021 (So Far)
Advertisement - Continue Reading Below
Who Is Christine Chiu on Netflix's 'Bling Empire'?
Could 'WandaVision' Get a Second Season?
Avengers Fans, Assemble: 'WandaVision' Is Here
Where Is Night Stalker Detective Gil Carrillo Now?
What We Know About Part 2 of 'Lupin'
A Look Back at Princess Anne's Life in Photos
Where Is the Cast of 'Gilmore Girls' Now?
The Most Hotly Anticipated TV Shows of 2021