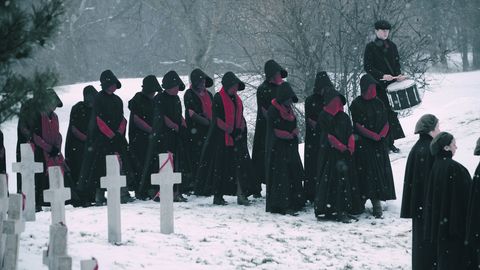 When Hulu announced its adaptation of Margaret Atwood's The Handmaid's Tale, the assumption was that it would be a limited series. The 10-episode, Emmy-winning show was based on a standalone novel, after all. But Hulu wasted no time making it clear that the show would go beyond the book. Here's everything we know about The Handmaid's Tale season two.

Season two of The Handmaid's Tale will premiere on Hulu on April 25 for a 13 episode run, instead of only 10 like season one.

Hulu announced that the show would have a second season just days after dropping the first three episodes of the first season. While some may have worried about where the show will go next, showrunner Bruce Miller promises, "The world can get a lot bigger." And, based on what we know so far about season two, it will.

Elisabeth Moss will return as our protagonist, Offred (whose real name is June).

In February 2017, Moss told The Pool that the horrors of season one were nothing compared to what's in store next. "Season two is going to be bad too, really dark," she said. In August 2017, she told Variety that she "got full body chills" reading the season two outline. "Give up trying to guess what happens," she warned fans.

Fan favorites Alexis Bledel and Samira Wiley will also be back.

Bledel was interviewed by EW about her character, Ofsteven/Ofglen/Emily—who fans haven't seen since halfway through season one—and had this to say: "She’s taken away, and you’re left wondering where she has gone. You can only assume the worst at this point.”

In January 2018, Handmaid's Tale executive producer Warren Littlefield confirmed in an interview with TV Guide that Emily is a "very critical part" of the new season. She'll show up in flashbacks and present-day scenes—exciting news for viewers who are dying to catch up on where she is now.

When it comes to Wiley's Moira, Miller told Vanity Fair that the character will "play a vital role" in season two. "At the beginning, Moira's in the hands of strangers," he said. "She's in the hands of this person she doesn't know. But that person conveys her to Luke—someone who does care about her."

Clea Duvall will also appear in season two, as Emily's wife, Sylvia, according to THR (it sounds like her part will take place in flashbacks).

Marisa Tomei and Bradley Whitford are also on deck to join the cast, Miller confirmed during the 2018 Winter TCA Press Tour. Tomei will appear in one episode and her storyline will take place in the Colonies. Whitford, on the other hand, will have a recurring role as Commander Joseph Lawrence, the architect of Gilead’s economy.

While the plot of season two has been kept mostly under wraps, a few details have slipped out. Here's what we know so far:

Someone (probably a handmaid) dies.

In January 2018, Hulu released an eery still from the second season that shows the handmaids heading toward a funeral, which many think is probably for a fellow handmaid.

"Everything from the design of their costumes to the way they look is so chilling," Miller told EW of the very gripping picture. "These scenes that are so beautiful, while set in such a terrible place, provide the kind of contrast that makes me happy."

Emily ends up in the Colonies.

This picture of Alexis Bledel's Emily in the Colonies is one of the most striking images we've seen from season two.

At the end of season one, Offred/June is pregnant and the baby is (very probably) Nick's. She also knows that her husband, Luke, is alive in Toronto. If she reunites with Luke, that could make things awkward.

"She's in this position where she might be in love with two people," Moss told ELLE.com. "I think she does love Nick—if I can speak for her—but I don't know if she knows that she does, yet. But she has a husband who she also loves, who's the father of Hannah, who she also now knows is alive. It's the most complicated Real Housewives episode you've ever seen."

Related Story
Exclusive: On Set with 'Handmaid's Tale' Season 2
This content is created and maintained by a third party, and imported onto this page to help users provide their email addresses. You may be able to find more information about this and similar content at piano.io
Advertisement - Continue Reading Below
More From Culture
'Bachelor In Paradise' 2021: Everything We Know
The 'Friends' Cast Just Dropped Iconic Merch
Advertisement - Continue Reading Below
Twitter Is Obsessed With Greg on 'Bachelorette'
You're About to Hear a Lot About Athing Mu
Meet the Cast of Katie's 'Bachelorette' Season
Blake Moynes Has a Thing For 'Bachelorette' Leads
'Skye Falling' Should Be on Your Summer TBR List
What Makes an Olympic Moment?
Team USA Fencers Protested Their Teammate
Hang On, What's "ROC" at the Olympics?