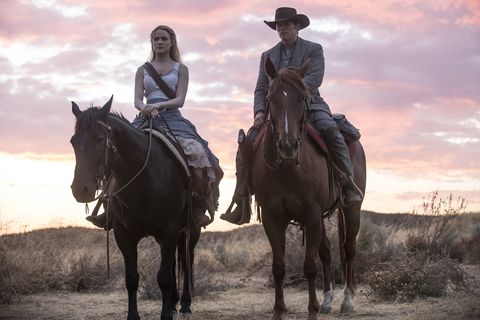 Westworld returns for its long-awaited and very highly-anticipated second season this weekend and we are READY FOR IT. The first season was a rollercoaster ride of emotions and plot twists. Those plot twists were surprises even to the cast, who were famously kept in the dark about twists, even the ones that directly affected their characters.

In the season one finale, Evan Rachel Wood's character, Dolores, was revealed to be the ominous Wyatt who had been referenced throughout the season. Even though Wood had a hunch she was Wyatt around the time she was filming episode seven, the producers didn't confirm the twist to her until she shot the finale.

"As we got scripts, this looming character, Wyatt, was there. And I kept trying to figure out who it was. I would talk to people on set and say, 'Have they cast him yet? Do we know when he's coming? Who is it?' " she told USA Today. "I looked under every rock and then around Episode 7, I went, 'I've looked under every rock except one, which means it's probably me.' I asked (executive producer Jonah Nolan), 'Is it me?' and he just laughed and walked away. But I wasn't sure until the finale. I was happy that I got a big reveal."

Even though the producers kept major plot points from the actors, some cast members did figure out spoilers about their characters. Jimmi Simpson, who plays William, for example, explained to Vanity Fair how he figured out that his character was the younger version of Ed Harris' Man in Black.

In season two, the producers went to even greater lengths to keep the actors in the dark. During a panel at the Tribeca Film Festival, Jeffrey Wright, who plays Bernard on the series, explained that season two's episodes were filmed out of order.

"They were filmed in a sequence designed to completely disorient me," he said, according Vulture. "It was really a fun exercise in that it required me to try and understand the specifics of the moment that served the interest of the character. I think I described it as Bernard waking up on the beach or in a mud pile in the middle of Woodstock having eaten the wrong acid."

During the same panel, Wood said, "I felt more confused in season two."

Kayleigh Roberts Contributor Kayleigh Roberts is the weekend editor at Marie Claire, covering celebrity and entertainment news, from actual royals like Kate Middleton and Meghan Markle to Hollywood royalty, like Katie Holmes and Chrissy Teigen.
This content is created and maintained by a third party, and imported onto this page to help users provide their email addresses. You may be able to find more information about this and similar content at piano.io
Advertisement - Continue Reading Below
More From Culture
Fans Are Ready for Second Season of 'Bling Empire'
What We Know About Part 2 of 'Lupin'
Advertisement - Continue Reading Below
You *Need* to Follow the 'Bling Empire' Cast on IG
Watch the Trailer for the New 'Euphoria' Special
We've Getting a Season 2 of 'Bridgerton'
New Drama Movies That Promise to Move You
The Sexiest New Movies of the Year
A Look Back at Princess Anne's Life in Photos
Where Is the Cast of 'Gilmore Girls' Now?
'The Bachelor' Is Back!