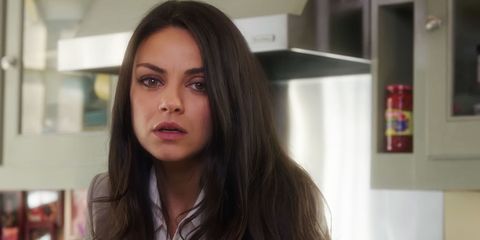 The Bad Moms trailer hit the internet this week, to much excitement. I watched eagerly because—hey!—it features funny ladies like Mila Kunis, Kristen Bell, Kathryn Hahn, and Christina Applegate, and was written and directed by the Hangover guys. Plus, as a 29-year-old woman who's interested in, you know, procreating in the future, it's just plain fascinating. What could go wrong?

First of all: Why are we *still* making movies about how soul-crushing modern motherhood is? And furthermore, why is that idea supposed to be laugh out loud funny?

That suit broke me.

It's the same look that Sarah Jessica Parker wears in I Don't Know How She Does It (2011), and Diane Keaton wears in Baby Boom (1987), and Teri Garr wears in Mr. Mom (1983). It's the one every woman wears in the stock images of "working mom." This suit has been staggeringly ugly for 30 years—and over and over again, it's a visual crutch Hollywood leans on to cue: Motherhood.

Except that the 2016 version we see in Bad Moms is *edgy*. Once they get to their breaking points, the moms say "fuck it" take shots and huff nitrous oxide and do donuts in parking lots with their kids in the car. They are open about how much their lives suck—and that's what's allegedly new here.

But are movies like this, and the general message of LOLZ IT'S SO AWFUL GET READY TO HATE EVERYTHING AND NEVER HAVE SEX AGAIN, supposed to prepare me, scare me, or make me claw out my ovaries with my single-girl manicured nails?

"'Bad Moms' comes off like a clumsy response to those same issues, further fanning the flames of a world that already reduces mothers to cartoon characters."

As a non-mom who does desperately want children one day, I know that motherhood will be difficult in ways that I can't yet fathom. After all, it's incredibly trying to be a mom in the United States—from the lack of paid maternity leave to the inflexible workplace culture to the limited affordable childcare options to the setbacks mothers have long endured through cultural perception.

But Bad Moms comes off like a poor, clumsy response to those same issues, further fanning the flames of a world that already reduces mothers to cartoon characters.

The trailer traffics in a lot of those tired, stereotypical dynamics you've seen before: good moms vs. bad moms (god, don't you just hate the mothers who bake?) or lame moms vs. cool moms (I'm not like the other moms, I'm a cool mom!), or married ladies vs. single ladies (you single girls should enjoy it while you can!).

In attempt to appeal to real moms and to display real motherhood, it's only highlighting the tropes and stereotypes that hold women back. And there's nothing funny about it.

Kaitlin Menza Kaitlin Menza is a freelance features writer.
Advertisement - Continue Reading Below
More From Culture
The Best Korean Dramas of All Time
Mainstream Movies With * A LOT * of Nudity
Advertisement - Continue Reading Below
Things Between Victoria F. and Chase Rice Got Ugly
Who Are the Women of 'The Bachelor' in 2020?
Rosalía Is The One To Watch At This Years Grammys
Sydney From the 'Bachelor' Knows Hannah Brown
The 10 Hottest Movies on Hulu Right Now
'The Bachelor' Has Already Finished His Season
When Michelle Carter Is Expected to Walk Free
How Much Time Did Michelle Carter Get in Prison?