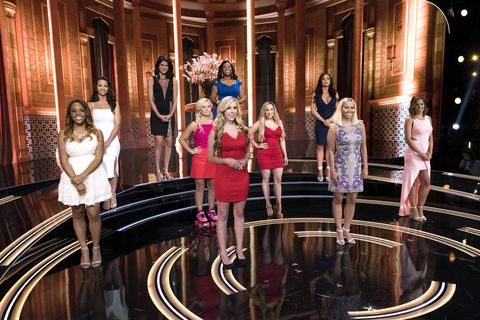 ABC’s new show The Proposal might be the worst thing I’ve ever willingly watched on TV. No joke, I'd rather tune into The Jerry Springer Show than catch another episode.

The premise is simple, yet unhinged: Ten women compete in a series of beauty pageant-like challenges. If they win, a man behind a curtain will propose marriage to them. Or, to put it in words the show’s host, Bachelor veteran Jesse Palmer, uses, “This is not a game. Tonight, ten lovely ladies will vie for a chance at love. And before the night is over, two people who have yet to meet will trust fate and leave here possibly engaged to be married.” Ads for the show call it a "soulmate pageant."

At first, it seems self-aware, like a big, schlocky joke we’re all in on. I settle in with my Perrier in hand, because as an admitted fan of The Bachelor (the producers of which make The Proposal), I’m intrigued.

The first thing that makes me think something isn't quite right is that the lucky bachelor in question, Mike, is introduced from what the show insists on calling a “pod.” Mike is a 29 year-old cop from Bakersfield, though the focus of his narrative is a motorcycle accident that forced doctors to amputate one of his legs. He’s clearly been through a lot, and this attempt to pull at my heartstrings succeeds. I keep watching.

All 10 contestants are introduced via quick, Real Housewives-style soundbites while they walk down to the stage. This turns out to be the entirety of the first challenge—just walking onto the stage so Mike In The Pod can get a better look. One woman’s personality is summed up as “Likes to Party.” Another woman, a writer, roller-skates onto the stage for a cute entrance. Yet another is a neuropsychologist who can also twirl flaming batons. All of the contestants are accomplished and pretty, which was the second time I recognize that something about this show felt weird. What are these women doing here? They’re too good for this.

Once onstage, they stand stiff and unblinking, wearing uncrackable smiles as Mike picks seven of them to move onto round two. The three who get kicked off leave the stage with their heads down. That is the turning point for me: This show isn’t inside-joke fun. It's degrading.

The second round ratchets up the humiliation. “We are going to have the women tell you what’s most important to them—in their bikinis!” announces Palmer. This, according to the show, forces the women to be “vulnerable,” and build a “real connection” with Mike. It’s so retrograde it’s actually shocking—I have to mentally double-check we were in 2018. Even Miss America got the memo that grading women in swimsuits was a thing of the past and removed the swimsuit portion of the competition. This show is apparently trying to bring it back, even if they couch it in feel-good terms like “vulnerability.”

Up to this point, Mike has said very little, asking each woman a single question at the end of each round. To the neuropsychologist, he asks how risqué she is in bed. When she declines to answer because of her job, she gets cut. So that’s nice.

The goal here is to win a marriage.

For the final round, pre-proposal, the final two women get to actually meet Mike. The two remaining women—a realtor and Likes To Party—see him, and then pitch him on why they’re his person. They aren’t asked anything about why they want to marry him, or even if they do want to. The goal here is to win a marriage.

At the end of the episode, Mike proposes to the realtor, getting down on one knee and saying,“From the first time you stepped out on the stage...” All I can think is, Oh, you mean 59 minutes ago?

Somehow, the glitz and the lighting worked, because she says yes and they share an awkward first kiss. I wonder if they’re now supposed to move in together.

The stage explodes with skeptical fireworks and the audience (which included the winning woman’s own mother) acts like this is a very happy occasion for the two strangers who just got engaged on-stage instead of the Handmaid’s Tale nightmare that had just unraveled on TV over the last hour.

In addition to being a whole 60 minutes of my life that I’ll never get back, The Proposal also fails in a broader sense. It’s too earnest in its “will they find love?” mission to be good trash, and it’s too grim to be genuinely sentimental. Instead it exists in a garbage middle ground that feels both awkward and horrifying. Love as a concept is worse off because of The Proposal, the sort of pseudo-love story makes a relationship look like a commodity to be won rather than a true commitment.

I've always been able to shrug off my love of The Bachelor as a guilty pleasure because, though it's a little cheesy, it ultimately seems to have a good heart. But when The Proposal sped up the premise of The Bachelor until it short-circuited, the result was not only a show that’s painful to watch, but one that made me reflect on whether The Bachelor itself isn’t even a little horrifying. There is no pleasure in The Proposal, just the feeling that you’ve been in the wrong place at the wrong time.

The Proposal is a love story for no one. It reeks of desperation, and may even risk one of ABC's marquee franchises by casting everything around it in a dystopian glow. When a show says it’s time to “open your pod” to meet your soulmate, you know something has gone Black Mirror-levels of wrong. Though nine women failed to win The Proposal, this show still exists, and so we've all lost.