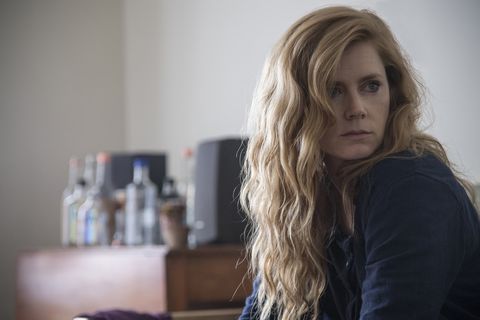 This is a recap for the first episode of Sharp Objects, which means there are SPOILERS ahead. If you haven’t seen the episode and don’t want to know what’s happening yet, come back once when you’ve seen it. You've been warned.

Truth be told, I came to Sharp Objects for a Big Little Lies-type of female-fronted prestige TV. A murder mystery is the key plot point, but it’s more of a character drama surrounding strong, imperfect women. The first episode of Sharp Objects, "Vanish," has all of that, but nearly everything about it was more akin to the first season of True Detective—gritty characters, blighted landscapes, and none of the veneer of a perfect world trying to keep it together in the face of horror. This is a show about people who were barely together to begin with, dealing with a monster in their midst. Granted, True Detective often relegated women—when they appeared at all—to the classic Madonna/Whore trope, as either victims who had it coming or women there to support the men who would figure out whodunnit. In Sharp Objects, things are far less clean-cut.

Maybe I should have seen that coming, too. The series is based on Gillian Flynn’s 2006 novel of the same name (she’s also a writer and producer on the show, MarieClaire.com talked to her about it here), and her other big novel-to-screen adaptation was the pitch-black comedy of violence Gone Girl. In Sharp Objects, women are everything at once, fleeing from and cracking under the pressure set upon them by the sleepy, old-fashioned town of Wind Gap, Missouri.

It’s here that we meet Camille (Amy Adams), a journalist in recovery from...something. We’re not told right away what it is, but her father-figure editor sends her back to her hometown to go after a big fish story: A “thinkpiece” (her words) about a small town also in recovery, reeling from the murders of two teenage girls. The setting is dreamy, full of ‘60s rock and dusty scenery as Camille drives home, swigging vodka from a water bottle the entire way.

(Can we talk about how much drinking and driving there is on this show? That alone kept me on edge the entire time—a feeling not alleviated by the creeping sense of doom that pervades every interaction.)

And what to make of those memories we see? The series opens with two girls—who we soon find out are young Camille and her sister—sneaking through a big, dollhouse-looking mansion in the country, before they intrude into present-day Camille’s bedroom in St. Louis. She wakes up just before she’s going to get poked with a needle by her younger self. By the third minute of the show, it’s clear this is a woman haunted.

Though we can’t yet trust her as a narrator, we feel for Camille—especially when we meet her mother, Adora, played with chilling primness by Patricia Clarkson, who looks like she got time-warped from a Tennessee Williams play. They’re the richest family in town, heirs to a pig butchering empire for which everyone else in Wind Gap seems to work. Even before arriving, Camille admits she doesn’t really know her younger sister, Amma, the child of her mom and very patient stepfather, Alan. But even if she might be an unreliable vessel for the story she’s there to report—the assignment itself a lifeline she’s reluctant to grab onto—Camille’s also apparently highly competent as a journalist. She knows where to show up and who to get close to and can pull it together when she needs to, even when she can’t get out of her own way (drunkenly falling asleep in her car in front of the local dive bar is not a good homecoming impression). She also quickly realizes that the lazy police chief and even the younger city detective (played by Chris Messina, a.k.a. that actor who is in everything) have no idea what they’re looking for or where to begin. The best they could think was to issue a curfew for teenagers—one that the pot-smoking, roller-skating girls Camille encounters early on seem all too eager to flout.

Side-note: I kept thinking of Amy Adams when she was in Enchanted, and how this part—body entirely covered in dark colors, bags under her eyes from a lot of sleepless nights—feels like an entirely different actress. She’s transformed in this role.

HBO
Wind Gap is a small town—word of Camille’s presence as the reporter from St. Louis gets out within hours—but how she’s remembered as a former resident who fled is still unclear. Was she popular? Her family was certainly rich, and people seem happy to see her, if a little hesitant to trust her snooping around. (Shout-out to Elizabeth Perkins, who should be in everything.) But there’s got to be a reason she left town and hasn’t been back. When we find out that Adora has kept Camille’s deceased and clearly-favored sister’s room completely intact (“like a museum”), the picture gets a little bit clearer.

With all that tension, it’s sometimes hard to remember that there’s a present mystery at the center of all of this. Of the two dead girls, one is still missing—search parties are still out looking every night—but we know a few things: The girls knew each other (not surprising in a small town, but they may have been closer than just acquaintances), one comes from a big family with a harried and loose-cannon patriarch and the other has an angsty and emotional older brother whom Camille initially pegs as a prime suspect.

And then, of course, they do find the second body. The victim's teeth have been pulled out, she’s been placed in a window sill in the center of town, and Camille is among the first on the scene. She’s appropriately horrified and shakes when brought into the police station, but does it seem like she’s able to shake it off surprisingly quickly? Of course, she’s still morose and exhausted-looking, but we get the sense this isn’t her first dead body.

But the body was the second-biggest twist, since we find out that the flirty, pot-smoking roller-skating girl that she’d been seeing around town was none other than Amma, that long-lost sister she never really met. When she gets a hug from her in the foyer of her mother’s dollhouse mansion, it takes Camille a minute to place her. Rather than cut-off shorts and fearless eye contact, this Amma is sweet and Lily Pulitzer-clad. In a single moment, that Madonna and Whore dichotomy that we got from True Detective is utterly ripped apart: In Wind Gap, girls can be both simultaneously, as long as the two worlds don’t interact too much.

Suddenly, nothing is really as it seems in this sleepy town.