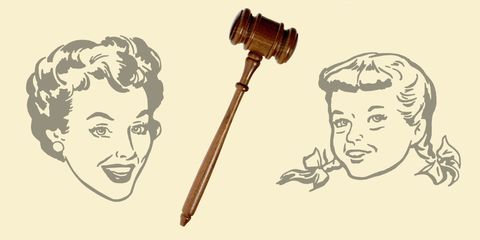 My dad—a guy who never smoked or drank, who worked out five days week, and whose job required him to pass bi-annual physicals—got the flu and suddenly died.

I'd moved from out of state to Michigan to live with my boyfriend (now husband) five weeks earlier, so my brother had to call me with the news. He'd been temporarily living with my dad while going through a messy divorce, and we both cried as he told me about their final day together. I booked a flight home that night but kept thinking, This can't be real. I can't be 23 and not have a dad.

I didn't know it then, but that feeling of shock was just the beginning of the end for my family as I knew it.

"Hearing her say that gave me a weird feeling—something sudden that stayed with me. I couldn't believe she could even think about money right now."

When my flight landed the next morning, my brother and I went straight to our mom's house, still rattled by shock. That was the first day my mom mentioned money. The two of us were sitting outside and she said, "I wonder what's going to happen to me? How will I afford to live?"

Hearing her say that gave me a weird feeling—something sudden that stayed with me. I couldn't believe she could even think about money right now.

Up until his death, my mother, a teacher, had been receiving alimony from my dad—they'd divorced and neither had remarried. Between her meager salary and the alimony, she was able to keep afloat.

But now, all that was called into question.

About a month after the funeral, I was back in Michigan and my brother was clearing out my dad's house preparing to move. While packing up his own stuff, he came across my dad's savings statements and life insurance policies. At the time, we had no idea what my dad had in terms of assets, or how they'd get divvied up—I just assumed we'd split three ways between my mom, my brother, and me.

About a month or so later, I went back to my home state for a friend's wedding. That's when I noticed my mom was still acting really weird about money. Like, when I offered to detail my brother's car because he let me borrow it, she said I could detail hers too since I had "all this money now."

I'm thinking, What are you talking about?

I'd just paid for my dad's funeral completely out of pocket—by myself. My brother couldn't afford to pitch in and I didn't even ask my mom knowing her financial situation. I had yet to receive any money from my father's life insurance policy.

I told my boyfriend about it when I got home and he said, point-blank, "She's going to sue you."

The very next day my mom called threatening legal action.

I couldn't even believe what I was hearing. She said her lawyer needed two numbers from me immediately: how much I was inheriting from my dad—and how much from that sum my mom would be getting.

That's when more details about my dad's last wishes became clear: As his ex-wife, my mom had been the beneficiary on my dad's first life insurance policy. But when I graduated college in 2009, he switched the policy over to my name. He didn't want her to have that money. (Based on language in the divorce decree, my mother thought she was legally entitled to his policy).

The phone still hot in my hands, I suddenly felt ill. How could she just assume that we wouldn't share any of our inheritance with her? And lawyer-up at the same time?

It's not like we weren't planning to help her. My brother and I had even talked about the possibility of paying off her mortgage, so she'd never have to worry about having a place to live.

I suddenly saw an ugliness in my mother that I wasn't at all prepared to see. Her raging greediness—and the fact that my dad had made it clear she wasn't entitled to anything—suddenly got to me in that very tense phone call. If she was willing to damage her relationship with her only daughter for money, particularly a daughter who has just lost her father, then why should she get any of it? Before I could think about it, I wrote down the full amount my brother and I were getting and a zero for the amount she would receive. Then I sent it to her lawyer.

She didn't respond right away, but later that week she sent me a text that essentially said I was no longer her daughter.

It felt like nothing at first. I honestly didn't think her text was even real. I figured we'd fight for a month or so, and then, once reason and time settled in, we'd get back to normal. Grief can warp people, and I still hoped my mother would come down from the heightened emotional state we were all grappling with. She sent more hurtful texts—I did my best to ignore them.

"Your mom is going to sue you."

Then we received a summons to appear in court. That's when it all started to feel real: I had to hire a lawyer to represent my brother and me.

At this point, I still hadn't received a dime from my dad's estate and all I could think about was how much this "inheritance"—which I hadn't asked for, and which I'm sure my father had hoped would be a blessing—was costing me.

I emptied my savings account to pay the lawyer's $5,000 retainer fee, not having any idea what was going to happen. Our lawyer told me she was confident my mom didn't have a case and that she'd handle it from there. I don't think she realized how persistent my mom could be.

Each time our mom filed a suit—and there were many—we'd go to court, her case would get thrown out, and she'd refile with whatever the next highest court was. This happened four or five times until it got to the state Supreme Court and she exhausted her appeals.

The money was finally ours.

I used a portion of my inheritance to buy a house, which seemed like a good investment. I didn't touch the rest of it for years until I got married in 2014. I knew that if he were still alive, my father would've wanted to pay for my wedding, and so I did for him. It was a beautiful way to honor his memory and his ongoing presence in my life.

About a year before the wedding, I finally did reach out to my mom. I became consumed by this fear that something would happen to her before we could resolve things—that she might pass away without me ever knowing. So I sent her an "I'm thinking of you" email one night and waited eagerly to hear back. For some reason, I'd assumed her response would be immediate. After five minutes of refreshing the screen, I finally gave up and went to bed.

When she did get back to me days later it was something generic—a "happy to hear from you," that's it. The disappointment was so cutting. I guess I just expected my own mother would respond with more enthusiasm after not hearing from me for years.

I decided not to invite her to the wedding.

"honestly, I do feel like I'm a bit of an orphan."

Awhile later, we began exchanging handwritten letters about once a month—the practice forced me to think about what I actually wanted to say rather than firing off something on impulse that could be hurtful. We exchanged niceties and revisited some of what had happened.

In December 2015, almost a year and a half after I got married, we met in person for the first time since my dad died. It was a nice. Polite. But sitting across from her as we traded sanitized details about our lives, I realized I just don't feel anything for her anymore. Even if she is my mother.

Now, whenever friends or new acquaintances ask about my family, I tell them I've lost both of my parents. Getting into all the details is just too exhausting. And honestly, I do feel like I'm a bit of an orphan.

It's been five years, and I'm so far removed from my mom now. I've mourned what we had and, as with all grief, I'm slowly learning to live without.