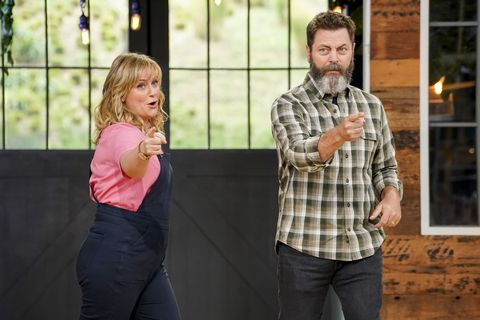 In order to talk about Making It, NBC’s new and extremely gentle crafting competition show hosted by Amy Poehler and Nick Offerman, we first have to talk about self-care. The term itself has fallen out of fashion a little in the last year (despite a five-year high in searches following the 2016 election), becoming a sort of eye-rollingly earnest symbol of the hashtag-resistance. As many smart pieces have pointed out (here’s one!), the concept of “self-care” started getting used to justify mindless indulgence, which effectively took it away from everyone but the really privileged (and at a time when marginalized communities needed it most of all). And though the term has a long history, and was even used politically during the civil rights and women’s movements, it’s hard not to figure that if 2018 self-care means $195 energy-clearing sage kits, we may have veered a tad off-message. (No offense to energy-clearing sage kits.)

I say all this because TV, when done correctly, can be the rare form of modern-day self-care that's accessible by practically everyone. To watch most TV shows nowadays, you need either a TV set, an internet connection, a smartphone, or a friend with any of the above. And though I recognize some people will still not have access to those things, the ones who do form a much bigger demographic than those of us who can buy, like, a $90 Diptyque candle. (No offense to Diptyque candles.)

Of course, TV in general isn't defacto self-care. Truth be told, I still can’t watch The Handmaid’s Tale because it gives me election flashbacks. But consider the incredible and unlikely success of The Great British Baking Show in 2016 and 2017. It became a multinational sensation, despite the fact that it had been on for years already and ultimately makes for insanely dull viewing—and I say this as someone who has seen every episode many times and considers it one of the best sleep-aids available. The stakes were small but you could put a lot of energy into caring about them (as Vox argued), it featured slow and panning shots of delicious treats, and people were so nice to each other that the folks who lost even got hugs from the judges who voted them off. It was a world that we needed to believe still existed, and we accessed it for, at maximum, the price of a month-long Netflix subscription.

And now really feel-good TV made specifically for those of us who live in a Trumpian world exists in the form of Making It, which aires its third of six episodes tonight (you can watch them on NBC.com for free). The premise is easy enough to follow: It’s The Great British Baking Show for crafts. More specifically, a group of “makers” with different and very impressive skills—papercraft, woodworking, sewing—come together in a well-appointed and light-filled barn to compete in tasks of creation, judged by experts Simon Doonan and Dayna Isom Johnson. Last Tuesday's overarching theme, for example, was “houses” and the competitions were things like “create a terrarium inspired by your hometown."

The word “joy” gets uttered frequently on this show, even by people who get voted off. Also, like The Great British Baking Show, there’s a lot of hugging. Winners get Brownie badges and the chance at $100,000, but the hosts are quick to mention that they don't want to talk about the money because the focus of the show should really be the joy of making things with your hands. Seriously.

Making It has an almost manic, hyperactive pleasantness.

In fact, perhaps the only true ideological divide between Making It and The Great British Baking Show is self-awareness. G.B.B.S. was already nice so we dragged it into our post-election nightmare world for warmth, whereas Making It has an almost manic, hyper-pleasantness that can only be conjured by people who've watched the news recently. It’s nice because it realizes that you could probably really use something nice at this exact moment. It's TV of the genre "Hey, hey! Don’t look at that push notification yet! Just take 30 minutes of your time and watch this nice lady make a unicorn stuffed animal!" Some may call it tap-dancing past the graveyard, but I think it's actually a survival mechanism in a self-care wrapper.

And no one embodies this more than co-host Amy Poehler, not a crafter herself (unlike Nick Offerman, who is a wonderful woodworker), but someone who needs this kind of niceness right now and makes it abundantly clear that that's why she's here. "Life is stressful enough," she says in the first moments of the premiere episode. "Let's make a show that makes you feel good." Remember a few months ago when she turned what was supposed to be a fluffy comedy Q+A into a dead-eyed referendum on the Trump administration? I’m really happy she gets to spend a few hours a week on a farm watching people do crafts.

The thing is, self-care is only dangerous when it’s deployed as a way to tune the world out. It's easy to use "self-care" as an excuse to cover your eyes and plug your ears and pretend nothing bad is going on because the idea that you might have to do something about it is so stressful that you'd rather just wash your hands of any badness. But real self-care is about remembering what gives life meaning—like joy and art and kindness—no matter how bad stuff gets.

Making It is a show about responsible self-care. It doesn’t want you to stop fighting the good fight and start sheet-caking. It just wants to remind you that there are still things worth fighting for, that there are parts of this often-horrifying world that remain good and we should try actively to preserve them. And I really needed to hear that right now.