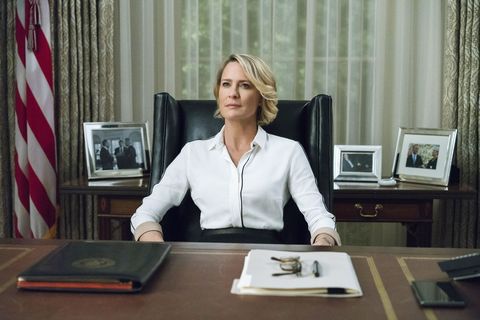 The Netflix hit House of Cards doesn't hold back when it comes to grisly ends—remember when Kate Mara was pushed in front of of an oncoming subway car?—and so, maybe, in its own words, "You should have known." Frank Underwood is dead in House of Cards' sixth season, a new promo for the hit show reveals. Not Jon Snow in Game of Thrones dead, but really dead. There's a shiny tombstone and fresh flowers and everything.

The character of Frank Underwood was written entirely out of the sixth and final season after Kevin Spacey faced sexual assault allegations last winter (which he denies). At the time, rumors swirled that Netflix would just kill off his character—especially when it was confirmed that Claire Underwood, the true hero of the entire series, would become president. (Finally! The ending in politics we all deserve.) Little was known for sure about Frank's fate, however, until the promo dropped Wednesday morning.

The teaser opens with Robin Wright standing in a garden. "I'll tell you this, though, Francis," says a very chill-looking Claire, considering her husband of several decades has perished. "When they bury me, it won't be in my backyard. And when they pay their respects, they'll have to wait in line."

You should have known. pic.twitter.com/UFGplyDSY1

The camera pans out to two tombstones, one belonging to Frank (or Francis Underwood, as is written on the grave), and the other belonging to his father. Frank, according to the tombstone, lived until 2017, which also happened to be the time that the allegations against Spacey resurfaced, effectively ending his career. Subtle, Netflix.

You can stream House of Cards on Netflix from November 2.

Related Story
A First Look At 'House Of Cards' Final Season
This content is created and maintained by a third party, and imported onto this page to help users provide their email addresses. You may be able to find more information about this and similar content at piano.io
Advertisement - Continue Reading Below
More From Culture
Dyland Arnold Is a Breakout Star in 'You' Season 3
'Virgin River' Season 4: Everything We Know
Advertisement - Continue Reading Below
Madi Prewett Shares Her Favorite Self-Care Books
'Only Murders' Is Getting a Season 2
Every 'Squid Game' Hint You Missed Along the Way
Meet the Cast of Netflix's 'Squid Game'
Listen to the Best New Love Songs of 2021 (So Far)
Shalita Grant Is Hilarious in 'You'
'Squid Game' Season 2: Everything We Know
Breaking Down the 'You' Season 3 Finale