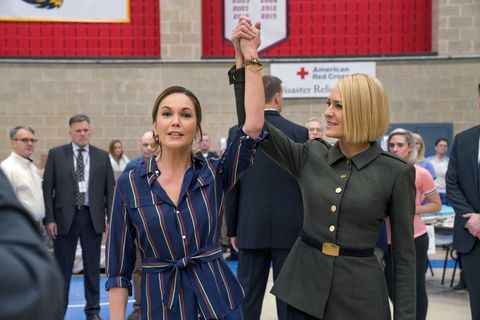 The last season of House of Cards dovetailed with the 2016 presidential election, which saw our dreams of the first-ever female president die. Over in the House of Cards universe, however, things are looking up: Claire Underwood is president, having taken over from husband Frank Underwood (Kevin Spacey was written out of the show following assault allegations). And yesterday, Netflix presented a first look at two cast members who will star in season six along with Robin Wright.

The sixth season, which will drop on Netflix on Sept. 2, will star Diane Lane and Greg Kinnear, who were confirmed along Wright as cast members earlier this year. Here's what we know: They'll play Annette and Bill Shepherd, a sibling duo at the helm of a massive industrial corporation named Shepherd Unlimited. The Shepherds and their corporations will be a "powerful behind-the-scenes force in the American political landscape," according to Netflix.

Per Netflix, both Annette and Bill Shepherd have a Complicated History with the Underwoods (well, now Underwood, singular), meaning they'll be the latest shadowy force to Exert Power in Washington. The difference is that it's Claire Underwood's Washington now (which certainly beats some Washington D.C.s I could name). Also, Claire Underwood is sporting a cropped and quite severe bob—a new look to match her new title after the TBD departure of husband Frank.

Then there's Cody Fern, pictured below, who will also star in the new season of American Horror Story and was also in the last season of American Crime Story. Fern will play yet another Shepherd, this one called Duncan, who is Annette's son and presumably also has a Shadowy History with the Underwoods. 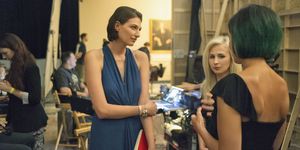 What It's Like to Be an Extra on 'House of Cards'
This content is created and maintained by a third party, and imported onto this page to help users provide their email addresses. You may be able to find more information about this and similar content at piano.io
Advertisement - Continue Reading Below
More From Culture
Breaking Down the 'You' Season 3 Finale
Get Ready for Some Incredible Books in 2022
Advertisement - Continue Reading Below
Fans Are Wondering If Madre Linda Is Real
So, Who Wins Michelle's Season?
Win Halloween With One of Those Costumes for Duos
Michelle Young's 'Bachelorette' Cast
All the Deets on Michelle's 'Bachelorette' Season
Everything We Know About Season 4 of 'You'
Tati Gabrielle Is Incredible in 'You'
'Ginny & Georgia' Season 2: Everything We Know