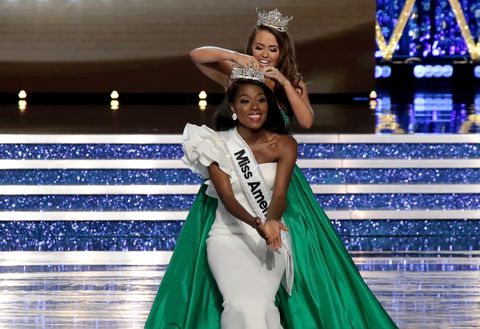 Earlier this summer, when the Miss America Organization announced that it would be putting an end to the pageant’s famed swimsuit competition, the news was met with mixed emotions. The decision to cut that portion of competition (as well as the evening wear competition) was made under the organization’s now mostly-female leadership, including Gretchen Carlson, who hinted at the #MeToo movement when she went on Good Morning America in June and said, “We are moving [the pageant] forward and evolving it in this cultural revolution.”

Meanwhile, opponents of the change feared a ratings crash that would mean fewer advertisers who could keep the pageant going (since, for better or worse, the swimsuit competition tended to draw eyeballs).

Sunday night saw the first major televised Miss America competition since the sweeping changes were implemented—organizers even called it Miss America 2.0—and it was as if “being modern” was this year’s theme.

A classically trained opera singer, Franklin made her advocacy for school music programs known during the competition. She mentioned at one point, per the New York Times, how “there is a 20 percent higher graduation rate at schools where music is a part of the curriculum.”

After the event, Franklin told press, "I've already seen so many young women reaching out to me personally as Miss New York asking how they can get involved because I think they feel more empowered that they don't have to do things such as walk in a swimsuit for a scholarship. And I'm happy that I didn't have to do so to win this title tonight because I'm more than just that."

Is it a little weak that the crowning of an African-American Miss America is considered groundbreaking in 2018? Maybe. But if this year's televised event was a course-correction after years of being behind the times, Miss America should be focusing on increasing the diversity of not only its competition, but its winner pool.

Franklin's win wasn't the night's only progressive moment. Earlier in the competition, Miss Michigan Emily Sioma introduced herself with a line so issue-focused that it would have seemed out of place in other Miss America pageants: “From the state with 84 percent of the U.S.’s fresh water but none for its residents to drink, I am Miss Michigan Emily Sioma.” The intro even made for a viral tweet:

“from the state with 84 percent of the u.s. fresh water but none for its residents to drink, i am miss michigan emily sioma” — the new #missamerica2019 pageant did not come to play pic.twitter.com/H05eifix2e

Sioma was referring to the ongoing water crisis in Flint, Michigan. The lead in the city’s outdated piping leaked into its portable water supply, leading to a deadly crisis that primarily impacts low-income residents, many of them Black. The issue remains largely unresolved since 2014, for reasons related to corruption, racism, and neglect.

Though the competition has had moments of political outspokenness from contestants, it still felt surprising to hear an issue this complicated and specific brought to the fore at Miss America—even if it is one of the biggest problems plaguing Sioma's home state. But this is Miss America 2.0, and if a young woman who wants to truly represent her home state can’t speak to its real issues during competition, what was the point of re-angling Miss America in the first place?

In just a few hours, Si0ma has already brought Flint's water crisis back into the national conversation. (Wrote The Detroit News: "Sioma, a University of Michigan graduate who majored in women's studies, was a contender...for Miss Internet.") Just imagine what this competition could really do for America if contestants made it about their state's biggest issues.

No matter what happens going forward, Sunday night was a coup for the organization, which had a lot to prove after its pivot away from more looks-focused competition. This year's pageant may have shown conclusively that even—or maybe especially—without a swimsuit competition, there are reasons to tune into Miss America.

Related Stories
Vanessa Williams Got an Apology From Miss America
The Case for Miss America's Swimsuit Competition
This content is created and maintained by a third party, and imported onto this page to help users provide their email addresses. You may be able to find more information about this and similar content at piano.io
Advertisement - Continue Reading Below
More From Culture
Read an Excerpt From 'We Were Never Here'
How to Join Marie Claire's Virtual Book Club
Advertisement - Continue Reading Below
See Inside Julianna Margulies's Personal Library
Could 'Manifest' Come Back for a Fourth Season?
The Most Unmissable Movies of 2021 (So Far)
The Eternal Sunshine of Juno Temple
Let's Talk About That 'Virgin River' Cliffhanger
Zendaya Shared a Teaser of 'Euphoria' Season 2
'Ginny & Georgia' Season 2: Everything We Know
Wait, Where's Hope in 'Virgin River'?