Today's Top Stories
1
The Making of Dawson's Creek's Most Iconic Couple
2
The Very Best "Me vs. 2020" Memes
3
Can We Beat the Next Supervirus?
4
The Future of Celebrity Styling Post-Pandemic
5
What's Cookin' With Sarah Flint
John Shearer/AMA2018Getty Images

If all you want for Christmas is more Mariah Carey in your life, there’s some great news: In an unlikely but nevertheless delightful turn of events, the soundtrack to the much-maligned 2001 film Glitter spent some time at No. 1 on the iTunes Albums chart this week. Why? Who knows! The movie came out in late September, not November, and 17 isn’t a particularly notable birthday.

The period immediately post-Halloween to slightly after New Year’s Day always means a resurgence of Mariah on the charts—“All I Want for Christmas Is You” re-entered the charts weeks ago. And this year there’s even more Mariah because her new album, Caution, drops Friday. Still, a sudden wave of appreciation for Glitter is pretty surprising.

According to the Fader, it all started when Carey’s diehard fans—called the “lambily,” a combination of “lamb” and “family”—started using the hashtag #JusticeForGlitter. You’ll recall, perhaps, the Glitter was not exactly a hit when it first came out. It has an abysmal 7 percent on Rotten Tomatoes and hasn’t even entered the pantheon of bad-but-fun diva crossovers, a la Britney Spears in Crossroads or Christina Aguilera in Burlesque (#JusticeforBurlesque).

So the only thing people really even remember about Glitter is that it was bad, and its soundtrack didn’t fare much better: Rolling Stone called it “big and goopy, with zero melodic or emotional punch.” But on Wednesday, the album started climbing the charts and by Thursday, it had somehow found itself the biggest album in the land for a little while (as of publication, I'm sorry to report, it had slid back down the charts).

The elusive chanteuse herself even tweeted about it:

I have to dedicate today's #tbt to Glitter, which is currently #1 on the iTunes albums chart, 17 years after its release and on the eve of my new album release! My fans are THE BEST 💖💖💖 #JusticeForGlitter!! LET'S GO #CAUTION⚠️ pic.twitter.com/i2v8Zkp1oy

Related Stories
Mariah Carey Opens Up About Her Bipolar Disorder 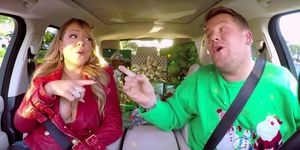