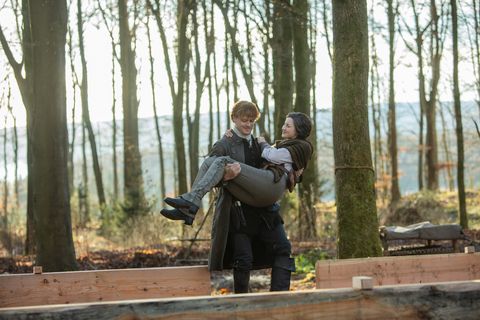 Tonight's episode, "Common Ground" might be the best episode of season 4 so far. The Frasers–Jamie and Claire and their nephew Ian Murray–are filled with hope and excitement as they begin their new life in North Carolina. There’s a healthy dose of danger and fear. The costumes are lovely–especially those of the Native Americans, in rich, natural colors. And…Claire gets to wear trousers!

Here, the biggest moments from episode 4:

There is a sense of wonder as Jamie, Claire, and Ian stake out their land grant from the Governor and begin to build their homestead. The Frasers are stunned by the beauty of the place and Ian is intrigued by the Native Americans. There is also a growing connection between Claire and her step-daughter-in-law, Marsali, who is pregnant and missing her mother, Laoghaire. Despite the fact that Claire despises Laoghaire (ok she did try to have Claire burned at the stake as a witch), Claire generously tells Marsali that her mother did a good job raising her. Of course, this makes Claire miss her own daughter, Brianna. Jamie, who knows her so well, immediately guesses what is wrong. He tells her that when he missed her desperately when they were separated for 20 years, he held onto images of “your face, your words, your heart” and Brianna will do the same.

This IS Outlander, so of course there’s danger. The Native Americans resent the Frasers presence and make threatening approaches to them. Claire suggests that they should change the location of their home. But Jamie has found his dream and won’t be moved. “I cannot tell you what it is for me to feel the rightness of this place.” He consults the frontier man, John Quincy Meyers about how to make a peace offering to the Indians. But! There is also an evil bear roaming the forest–stealing their food, attacking their horse, and nearly killing Meyers. Jamie decides it’s time to take on the bear.

While Jamie stalks the bear, the Indians perform a ritual ceremony to rid them of it, because it’s been attacking their village too. Both scenes unfold simultaneously, and it becomes clear the Native Americans are calling on their spirits to help Jamie take on the monster–which turns out to be a mad man, an Indian who was expelled from the village dressed as a bear. After a vicious fight, Jamie (of course) slays him and brings his body to the Indians. What better peace offering could he find? In gratitude, the Indians grant him the name “Bear Killer” and the first connection between the Frasers and their neighbors is forged.

BACK TO THE FUTURE

Meanwhile, back in 1970s Scotland, Roger Wakefield has discovered the history of Fraser’s Ridge and realizes that Claire really did find her lost love, Jamie. He calls their daughter, Brianna (the old phones are pretty wonderful) in the US to tell her, hoping they can reconnect. Though thrilled to know her mother survived, Brianna still holds back from Roger. When he finds another clue that Jamie and Claire died in a fire in their home sometime in the 1770s, he holds back from telling Brianna. When he finally calls to do so, her roommate Gail says she’s on a trip to Scotland. Where, Roger asks. To see her mother, Gail replies.

While their daughter searches for them, Jamie and Claire seem to be finding themselves in the New World. Jamie has a purpose again. He has land he loves. He’s able to protect his family. Most importantly, he has his wife, his soulmate by his side. Claire is able to use her skills as a doctor again to help heal Meyers. She’s forging a friendship with a Native American woman who is also a healer. She seems happier, softer, more affectionate. As the relationship between Jamie and Claire deepens, they become easier, more flirtatious with each other. Nothing embodies it more than the moment he picks her up–trousers and all–and carries her across their half-built threshold. He describes his plans for the house and she tells him “it’s perfect.”