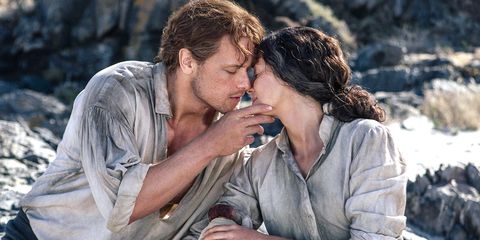 The Droughtlander is upon us. Outlander finished airing its third season in December and now fans are left waiting as patiently as possible (i.e. not patiently at all) for Season Four. Here's everything you need to know about the upcoming installment.

One thing we know for sure about Outlander Season Four is that it will air this fall, making this hiatus shorter than the last (thank God). Showrunner Ronald D. Moore explained that bringing fans more show with less wait required a lot of extra work behind the scenes.

"We were actually working on Season Four while we were still shooting Season Three this year," Moore told EW. "So it made it a much more difficult production because, now, you had to shift focus for writers and department heads to start working on that season while the one we were currently on was still underway."

Season Four will have 13 episodes, just like Seasons Two and Three.

Season Four's plot will be based on Diana Gabaldon's Drums of Autumn, for any fans who want to read up on what to expect next for Jamie and Claire. One thing we feel pretty certain of: Jamie and Claire are heading for the States.

@caitrionabalfe and @samheughan blew Season 3 of #Outlander out of the water. Join us in thanking them both for their amazing talent! #STARZ #BTS

According to Gabaldon's website, the novel on which the upcoming season is based follows Claire, Jamie, and his nephew Ian as they "seek to find a place for themselves in the colony of North Carolina, treading a dangerous line between Governor Tryon’s patronage and Claire’s knowledge of the brewing revolution in America."

Sam Heughan and Caitriona Balfe will, obviously, return as Jamie and Claire. Lauren Lyle and César Domboy will also be back as Marsali and Fergus. Who else will be around for Season Four though?

Moore has teased the possible return of Tobias Menzies in future seasons—but it isn't clear if he'll be back as Frank Randall or Black Jack Randall.

Season Four will also see some new additions to the cast.

In October, news broke that Maria Doyle Kennedy and Ed Speleers would be joining the cast as Jamie's aunt Jocasta Cameron and Stephen Bonnet, an Irish "pirate and smuggler," respectively.

And, finally, the official Outlander Instagram account revealed the most important casting of all: The dogs who will play Rollo, young Ian's pet.

We are verra excited to announce the newest and cutest additions to the #Outlander clan! Meet the adorable pups who will be playing Rollo in Season 4. #STARZ

Season Four might take place in America, but don't get your hopes up about casually running into Sam Heughan and Caitriona Balfe in North Carolina this year.

How good was @SamHeughan in the reunion episode?? #Outlander #STARZ #BTS

According to Moore, Scottish locations will double for 18th century America.

"We’ll also go to Eastern Europe and shoot some stuff for the mountains and rivers of North Carolina," he told EW.

Well, there go all our hopes and dreams.

The trailer for the series' fourth season dropped on Monday, September 10, following the Frasers as they take root in the back country of North Carolina in the days leading up to the American Revolution in pursuit of the American Dream.

“Do you know what lies beyond those trees? This is just the start of what America will become. People come here in the thousands, all hoping to live the American dream,” Claire (Caitriona Balfe) says to Jamie (Sam Heughan) in the opening of the trailer, which also features appearances from previously announced new characters Stephen Bonnet and Jamie's aunt, Jocasta. Over in the 20th century, Brianna (Sophie Skelton) has come to find out some shocking details details about her parents' history with help from Roger Wakefield.

Related Story
Inside the Making of 'Outlander's' Sex Scenes
Kayleigh Roberts Contributor Kayleigh Roberts is the weekend editor at Marie Claire, covering celebrity and entertainment news, from actual royals like Kate Middleton and Meghan Markle to Hollywood royalty, like Katie Holmes and Chrissy Teigen.
Advertisement - Continue Reading Below
More From Culture
Sydney From the 'Bachelor' Knows Hannah Brown
The 10 Hottest Movies on Hulu Right Now
Advertisement - Continue Reading Below
'The Bachelor' Has Already Finished His Season
When Michelle Carter Is Expected to Walk Free
How Much Time Did Michelle Carter Get in Prison?
'Bachelor' Peter Made a Hilarious Video As a Kid
31 Movies That Are Only About Sex
Who Is 'Bachelor' Contestant Mykenna Dorn?
The Best Love Songs of 2020 (So Far)
A New Show About the Royals Is Coming to HBO Max