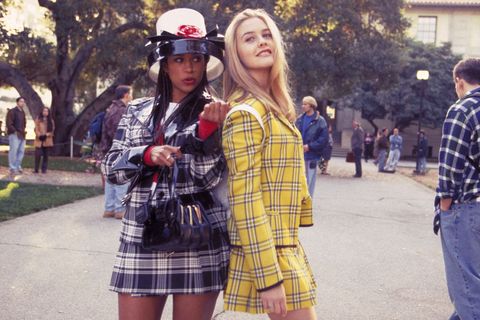 You know your favorite movie lines like the back of your hand: they make for the perfect response to everyday situations and many have taken on immortality in the form of memes and GIFs. Bad day? "I'm in a glass case of emotion." No one responding to your group text? "Bueller...Bueller...Bueller." Trying to bypass slow walkers on the sidewalk? "By all means, move at a glacial pace, you know how that thrills me." Below (and in no particular order), 15 of the best modern comedies and the LOL-worthy quotes we still can't get out of our heads.

The movie that invented the term "stage-five clinger" had a knack for serving up equal parts cheesy, inspirational quotes and bro-tastic humor that remained in circulation long after the movie aired.

Best Throwaway Line: "I gotta get outta here pronto, I got a Stage 5 Clinger."

Sandra Bullock at her best as an undercover cop who undergoes a total beauty overhaul to pretend to be a pageant contestant.

You've Seen It, You Know It: "I'd have to say April 25th. Because it's not too hot, not too cold, all you need is a light jacket."

Best Throwaway Line: "I haven't seen a walk like that since Jurassic Park."

The movie that was the first to put the terms "derelicte" and "orange mocha frappuccino" into popular vernacular, and had the honor of staging the most epic walk-off scene in movie history.

You've Seen It, You Know It: "I feel like I'm taking crazy pills!"

Best Throwaway Line: "You think that you're too cool for school, but I have a newsflash for you Walter Cronkite...you aren't."

Because the Internet loves making memes of Meryl, it only makes sense that when she starred in this book adaptation, every one of her condescending lines became iconic.

You've Seen It, You Know It: "Florals? For spring? Groundbreaking."

Best Throwaway Line: "Oh I'm sorry...Do you have some prior commitment? Some hideous skirt convention you have to go to?"

The movie that made all of us want to give up our degrees for a stint at law school, swap out our stationary for pink scented paper, and adopt a tiny chihuahua.

Best Throwaway Line: "Oh, I like your outfit too, except when I dress up as a frigid bitch, I try not to look so constipated."

One of the most hilarious Quentin Tarantino movies ever made, and easily the most quotable. Samuel L. Jackson's character delivers some of the best lines in movie history.

You've Seen It, You Know It: "Does he look like a bitch?"

Best Throwaway Line: "Just because you are a character doesn't mean that you have character."

Cher Horowitz's "valley girl" slang was funny then and remains a timeless teen movie for its witty takes on fashion, high school politics, and dating.

Best Throwaway Line: "You're a virgin who can't drive."

Even when you thought you were done with chorus shows like Glee and talent competitions like American Idol, there was Pitch Perfect, the perfect combination of humorous digs and a capella jokes.

Best Throwaway Line: "Well, sometimes I have the feeling I can do crystal meth, but then I think, 'Mmm, better not.'"

This classic film has aged super well even though it's, oh, 30 years old by now, which is probably due to the fact that it's the ideal mixture of action, romance, and adventure. Plus—the silly humor never really gets old.

Best Throwaway Line: "I just want you to feel you're doing well. I hate for people to die embarrassed."

This very dark teen comedy starring Winona Ryder and Christian Slater is still a cult-favorite film for its biting depiction of a couple who take on the most popular clique in school.

You've Seen It, You Know It: "What is your damage, Heather?"

Best Throwaway Line: "F*ck me gently with a chainsaw. Do I look like Mother Teresa?"

Does your best day ever even compare to this high school king's shenanigans of cutting class, borrowing a Ferrari, and hamming it up in Chicago?

Best Throwaway Line: "I weep for the future."

Kristen Wiig and Rose Byrne star in one of the bawdiest female comedies out there (and finally, one that was actually well-written) which gave us a hilarious take on sex, failure, and female friendships.

The Coen brother's at their finest gave Jeff Bridges the role of a lifetime as "The Dude," whose stoner language gave us some of the best iconic deadpan quotes out there, man.

You've Seen It, You Know It: "That rug really tied the room together."

Best Throwaway Line: "Let me explain something to you. Um, I am not 'Mr. Lebowski.' You're Mr. Lebowski. I'm the Dude. So that's what you call me. You know, that or, uh, His Dudeness, or uh, Duder, or El Duderino if you're not into the whole brevity thing."

There are so many one-off quotes in this movie, that it's worth watching several times to catch all of Ron Burgundy's team of newscasters' non-sequiturs and random exclamations.

Blessings for Tina Fey helping to write one of the best teen comedies of all time and one of the consistently most quoted and memed movies of all time. The movie delivers one-liners one after the other that feel permanently tattooed on our brains.

Best Throwaway Line: "You smell like a baby prostitute."