Today's Top Stories
1
How to Help Those Affected by the Beirut Explosion
2
50+ Beauty Products That Will Change Your Life
3
We Should Have Known About J.K. Rowling's Views
4
Cute Ankle Boots to Wear Now and Forever
5
The Oral-B iO Toothbrush Replacing My Dentist RN
YouTube

Happy Monday morning from Taylor Swift, who just released the music video for her new single "You Need to Calm Down" bright and early on YouTube. The video just aired on Good Morning America and YouTube at 8:15 A.M. And it featured a surprise cameo from Swift's former frenemy-turned-friend-again Katy Perry. The two hugged at the end of the video, with Perry dressed like a hamburger (like she was during the Met Gala) and Swift dressed like French fries.

Swift and Perry have been in a feud since approximately 2013, after a kerfuffle around backup dancers. But last year, things started looking up: Perry sent Swift a literal olive branch in advance of the latter's Reputation tour, and just this month Swift sent Perry some homemade cookies. Fans began to suspect that the bad blood had finally stopped flowing—and this morning's music video release gave them confirmation.

During Swift's Instagram Live last week, during which she announced her album and that "You Need to Calm Down" would be her new single, the singer teased that there's a lot packed in this video (and by a lot, she likely means easter eggs that will give hints about the rest of her upcoming work; Swift will release 18 songs on her album Lover).

"The video is very worth the wait," she said of why she released just the song Friday. "There's a lot going on in the video so I wanted that to be a separate discovery."

And there truly is a lot here:

Asked a few friends to be in the You Need To Calm Down video 😄 Out tomorrow at 8:15am ET pic.twitter.com/QFp2Ni4Lb0

Hall is a friend of Swift's, Swift has been a longtime guest on DeGeneres' talk show, Reynolds is the husband of Swift's good friend Blake Lively (Swift borrowed Reynolds' Deadpool costume for Halloween in 2016), Porowski is friends with Swift's close friend Gigi Hadid, Swift performed with Kiyoko at the Ally Coalition Talent Show in December, and Swift and Ferguson were at Stonewall together this weekend. And that's just a starting list of how Swift is publicly connected to her celeb star list. 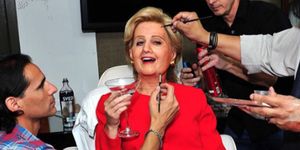