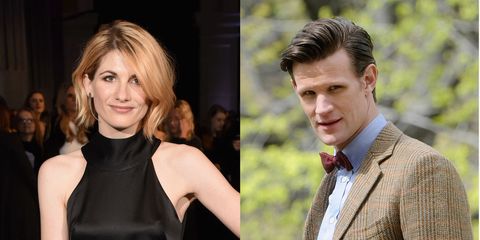 In news that has divided the internet, it's been revealed that Doctor Who's Thirteenth Doctor will be played by Jodie Whittaker. The news isn't a total surprise to viewers, as possible candidates for the role had included names like Tilda Swinton and Olivia Colman. British Whittaker will replace the Twelfth Doctor, Peter Capaldi, following 2017's Christmas special.

Whittaker's casting follows the hiring of Chris Chibnall as Doctor Who's new showrunner for the forthcoming season. Chibnall previously worked with Whittaker on his detective series Broadchurch, and said in a statement on Sunday, "I always knew I wanted the Thirteenth Doctor to be a woman and we're thrilled to have secured our number one choice."

In her statement regarding being cast as the next Doctor Who, Whittaker said, "It's more than an honor to play the Doctor. It means remembering everyone I used to be, while stepping forward to embrace everything the Doctor stands for: hope."

There are little girls who are growing up with Gadot as Wonder Woman, a female Jedi and a female Doctor. I love it. #doctor13 #DoctorWho

Whittaker's casting is totally groundbreaking, as in its entire history, only men have portrayed the Doctor. First airing in 1963, Doctor Who has gone through a plethora of regenerations, but has never been played by a woman before.

If you think you love Dr Who, but can't accept this change, then you never really got Dr Who.

While Whittaker is sure to encounter furious backlash, she'll also be responsible for inspiring the next generation of Doctor Who fans, who will finally have a female Doctor and role model in their midst.

Amy Mackelden Weekend Editor Amy Mackelden is the Weekend Editor at HarpersBAZAAR.com, where she writes about entertainment, celebrity news, beauty, and fashion.
Advertisement - Continue Reading Below
More From Culture
The Best Korean Dramas of All Time
Mainstream Movies With * A LOT * of Nudity
Advertisement - Continue Reading Below
Things Between Victoria F. and Chase Rice Got Ugly
Who Are the Women of 'The Bachelor' in 2020?
Rosalía Is the One to Watch at This Year's Grammys
Sydney From the 'Bachelor' Knows Hannah Brown
The 10 Hottest Movies on Hulu Right Now
'The Bachelor' Has Already Finished His Season
When Michelle Carter Is Expected to Walk Free
How Much Time Did Michelle Carter Get in Prison?