Any longtime fan of Grey's Anatomy knows that anything—and I mean, truly, anything—can happen on this show. (See: The arrival of Denny's ghost.) We've had earthquakes, explosions, hurricanes, bridge collapses, gunfire, and more incidents of flatlining than I can count. Grey's 16th season kicked off with one (1) unexpected pregnancy, two (2) dramatic breakups, and three (3) firings, so the drama shows no sign of slowing down.

There are no fans like Grey's fans, probably because there have been 343 episodes and counting, and that's no small emotional investment. True to form, they've been hard at work theorizing about what's going to happen in this season, so allow me to present the best (a.k.a. the ones that blew my mind the most).

In episode one, we see that Alex is still out of work—and given that Jo is seeking mental-health treatment (and was only a fellow, albeit a "surgical innovation" fellow, to begin with), Alex is now the breadwinner of their household. He's also clearly not very good at being unemployed, which made it no great surprise when Richard showed up and suggested that Alex apply to run the lowest-ranked hospital in the city, Pac North—because, well, even the lowest-ranked hospital in the city thought Richard was too old to take over.

One Reddit user wrote: "This would be an interesting story line. Competing hospitals." They're right—except that this would sort of bleed into a past storyline, as someone immediately pointed out: "That eventually merge! ...oh wait..."

Agreed another person: "How long before Pac North and GS merge?" Someone added: "I'm wondering if it's going to eventually turn into a spinoff. Shonda has said she won't do Grey's Anatomy without Ellen Pompeo, so maybe she's setting up a new show with only the still decent characters (and will slowly pull them from Grey Sloan)." Another person doubled down on the theory: "I'm wondering if they are setting up Pac-North as a spinoff show in case Ellen Pompeo wants to leave the show. You can't have a show named Greys Anatomy without a Grey."

Deluca is getting more and more screen time in recent seasons, which might point to him helming it: "Deluca is going to Pac North. Calling it now," someone wrote.

Amelia's Pregnancy Is Going to Be a Whole Thing

Look, season 15 just had a big surprise pregnancy storyline (hello, Teddy), so this storyline is probably going to go down a different path. Obviously, Amelia has been pregnant before—she had a son who was born without a brain (official term: he was anencephalic), who lived for just under an hour—so this might stir up all kinds of trauma for her. As one person commented on Reddit: "It’s going to bring up a lot of interesting topics / flashbacks from her first pregnancy. She also mentioned Private Practice in this episode so I wonder if any of those doctors will come back to support her." (Kate Walsh! We want Kate Walsh!)

Why Does Bailey Hate Tom?

It's never entirely clear why Bailey hates Tom Koracick, as is made clear in episode two, but Reddit sure has theories. "Because he has the charm and arrogance that she used to have. But she's lost her spark. So she hates him because she's jealous of his confidence," someone guessed.

What's the Endgame With Meredith Taking on Health Care?

We get it, we get it—a full decade as a prolific surgeon wasn't enough to make Meredith see that the U.S. health care system is broke, but this one kid with cancer did. Like, it really did. So what's next?

Some theories: "meredith is gonna start working at a prison hospital," per one person. Another: "is meredith about to take on big pharma or..." And my favorite: "The only logical step for Meredith is to become president and pass Medicare for All legislation."

And What About Zola?!

Okay, I had forgotten this, but I'm pretty sure the writers had too. Recalls one user: "do you think we’ll acknowledge that zola has spina bifida this season?" This is a good point: When Derek and Meredith adopted Zola many moons ago, it was noted that Zola has spina bifida and a Chiari malformation, a brain defect. Zola...seems to exhibit symptoms of neither of these chronic illnesses.

"The writers definitely don't remember," assured another person on Reddit. "I tell my wife this every time [Zola] is on screen. Thanks for the lol!" someone else wrote. 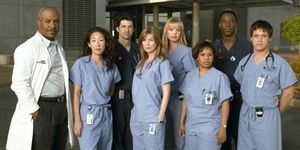 A Timeline of All the 'Grey's' Cast Drama
This content is created and maintained by a third party, and imported onto this page to help users provide their email addresses. You may be able to find more information about this and similar content at piano.io
Advertisement - Continue Reading Below
More From Culture
When You Can Expect New Episodes of 'The Circle'
'Shadow and Bone' Season 2: Everything We Know
Advertisement - Continue Reading Below
Meet the Cast of Katie's 'Bachelorette' Season
The Best '80s Movies Ever Made
'Shadow and Bone' Cast: Get to Know Who's Who
The Unbearable Whiteness of Ballet
'Ginny & Georgia' Season 2: Everything We Know
The Ultimate Ranking of 'GOT' Sex Scenes
The Cast of 'The Nevers' Plays Trivia
The Most Exciting New TV Shows of 2021