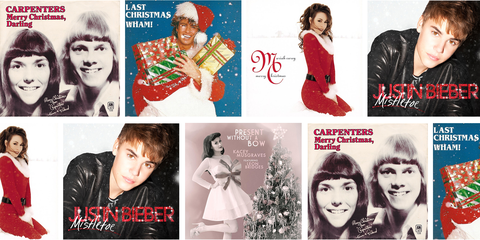 There's something about the holiday season that just oozes lovey-dovey feelings into the air. Whether it's the overflowing amount of romantic Christmas movies coming from the Hallmark channel, or the couples' holiday photos dominating your Instagram feed, one always ends up feeling particularly romantic during the holidays.

Holiday music in particular can get us in the feels, and for that reason, I've compiled a list of the best romantic Christmas songs, from Wham! all the way to Kacey Musgraves. I've even made a nifty Spotify playlist so you can play them all at once! (Romantic partner not included.)

"Have Yourself a Merry Little Christmas" —Judy Garland

Written for Judy Garland's 1944 movie Meet Me in St. Louis, the song was initially so sad Garland refused to sing it. Thankfully, the lyrics were tweaked, and we've come to love and adore the (still) sad but hopeful song about wishing someone you love to have a Merry Christmas.

To have Kacey Musgraves and Leon Bridges under my Christmas tree would be nothing short of the perfect present, but until that happens, this song will fit the bill.

We have George Michael in his prime! We have '80s synthesizers and ski wear! It's what St. Nick would've wanted in an '80s pop Christmas song, I'm sure of it.

Listening to the lyrics of "This Christmas" will make your heart four times bigger. "And as I look around/ Your eyes outshine the town, they do/ This Christmas."

"All I Want for Christmas Is You" —Mariah Carey

Would it be dramatic to say this song invented Christmas music? Probably, but the holiday season is not complete without Ms. Mariah Carey and her high notes.

There's a reason why David Letterman brought Darlene Love onto his show to sing it every Christmas for three decades. It's just that good.

I'll admit it—I wanted to be the girl being courted by Justin Bieber when I first saw this music video in 2011. There are many hits off of his Under the Mistletoe album, none shine brighter than 'Mistletoe.'

"One More Sleep" counts down to when Leona Lewis' special someone will return home for Christmas. "Cause I've got five more nights of sleeping on my own/ Four more days until you're coming home/ Three more dreams of you and mistletoe/ Two more reasons why I love you so."

The song is about a World War II solider believing he'll come home for Christmas. What I love about Frank Sinatra's version of the Bing Crosby original is how tender it sounds as he sings, "Christmas Eve will find me/ Where the love light gleams/ I'll be home for Christmas, if only in my dreams."

"Do They Know It's Christmas" —Band Aid

While this isn't the most traditional "in love during Christmas" song, the idea of spreading love beyond the people closest to you is always festive.

"I Want To Come Home For Christmas" —Marvin Gaye

Recorded from the perspective of a solider serving in Vietnam in 1972, "I Want To Come Home For Christmas" wasn't actually released until 18 years later in 1990. Since then the song has been deemed a classic reminder of Marvin Gaye's unforgettable voice.

If I don't hear Karen Carpenter's voice during the holiday season, I've failed to celebrate accordingly. While there are many covers of this song, no one sings it better than Carpenter circa 1970.

"Blue Christmas" is a tale of unrequited love during the holiday season. Known as one of the most popular Christmas songs, Elvis Presley didn't want to record it at first at a scheduled studio session in 1957, but we're so glad he did.

As you probably know, the lyrics from the original version of "Baby, It's Cold Outside" are a little bit creepy. Thankfully, John Legend and Kelly Clarkson revamped the song with lyrics you can totally get behind.

"I Never Knew The Meaning Of Christmas" —*NSYNC

It would be a crime to not include one of the many hits from *NSYNC's holiday album. You're probably familiar with "Merry Christmas, Happy Holidays," but "I Never Knew The Meaning Of Christmas" is a song about how not knowing the meaning of Christmas until you found the special someone.

"I've Got My Love To Keep Me Warm" —Dean Martin

"My Only Wish (This Year)" —Britney Spears

Most Britney fans already know she has one of the most underrated Christmas songs. If you're new to the group, welcome! In the song, she sings, "Can't be alone under the mistletoe/ He's all want and a big red bow/ Santa, can you hear me?"

"The Greatest Gift of All" —Dolly Parton, Kenny Rodgers

Related Stories
The 20 Best Royal Family Christmas Cards, Ever
The Official MC Editor Holiday Wish List
91 Drinks to Get You in the Holiday Spirit
Bianca Rodriguez Bianca Rodriguez is the digital fellow at Marie Claire, where she covers all your favorite podcasts, Netflix shows, and celebrities ranging from Rihanna to Harry Styles.
Advertisement - Continue Reading Below
More From Best Songs of All Time
Watch the Best New Music Videos of 2020
Listen to These Sad Songs If You Need a Good Cry
Advertisement - Continue Reading Below
The Best Love Songs of 2020 (So Far)
The Ultimate Valentine's Day Playlist
The Best New Music of 2020 (So Far)
The Best Love Songs to Ever Exist
Brush Up Your Karaoke Go-To's With These New Songs
The Best New Cover Songs to Play on Repeat
Play These Sad Songs When You're Feeling Down
Get In Your Feels with the Best Love Songs of 2019