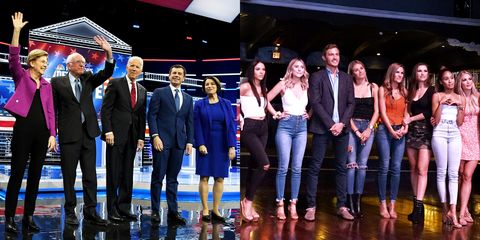 In the nicest way possible, the year 2020 has given me a permanent headache. Yes, I understand that it's March. But if you had looked at your small screens lately and seen what I've seen, you, too, would suffer from such head pain. To be specific: I'm talking about this season of The Bachelor and the race for the 2020 Democratic nomination for president.

Before you write me off, understand that I come from a space of love for both of these events. One of these will change the future of our country, and the other one allows me to eat a cheeseboard alone freely. You see? Both are important. And as both events wind down from the height of their mid-season drama (Fantasy Suites and Super Tuesday), I've come to realize the two are more similar than I thought.

There's next to no diversity.

In the history of the Bachelor and the Bachelorette, we've only had one person of color as the lead. (I love you, Rachel!) Keep in mind, the show has been around for almost 20 years. Yes, the contestants in the past few years have become a little more diverse, but in the end, the finalists always look very similar.

As for our hopeful presidential candidates, you already know what I'm going to say. (Don't get me started on the end of Elizabeth Warren's campaign.) In the beginning, the future looked so bright with six women and five people of color running, and now the Democratic nominee will most certainly be one of two septuagenarian white cis men.

There are so many unqualified candidates!

Personally, I could write a novel about why anyone who can still qualify to be on their parent's health insurance should not be allowed to be competing to get engaged on television. Initially, the whole point of The Bachelor was to have people in their late 20s and 30s attempt to find love. Now the age range is all over the place, hence even more unnecessary drama.

On the other end, the number of not-particularly-qualified white men running for office this year was haunting. I'm not one to point fingers, but the idea of a person with no political background running for president of our country is genuinely terrifying. Then again, the 2016 election happened, so I'm back to square one.

You have to keep up with both for your group chat.

Half of the reason I watch both the hysterical mess that is The Bachelor and the socially sanctioned mess that is the Democratic primary is to make myself relevant in conversation. It pays to watch people yell at each other on TV sometimes!

In a perfect world, the Democratic race coverage would be more relevant than a Bachelor episode, but c'est la vie!

They have a central meeting point—where interruptions are not welcomed.

All right, hear me out: cocktail parties are to the Bachelor franchise what debates are to the presidential election. The contestants and candidates all show up ready to prove to someone(s) that they are fit for a position. Chaos ensues!

At their central meeting points (debates, dates, you get the gist), don't even think about interrupting someone else's moment. If someone butts in on someone else's 1-on-1 with Peter, shit will indeed hit the fan. The same goes for when all our Democratic nominees get together. Half of the debates has just been candidates talking over each other, so we hardly ever hear that they're here for the right reasons! Which brings me to...

They have to convince someone they're here for the right reasons.

Throughout both processes, these people must convince us (and the lead of the show, I guess) that they are here for the right reasons! So, no, the 23-year-old isn't here for an increased social media following, but perhaps love, and, no, Mike Bloomberg didn't run for President just because he had a bunch of cash lying around and was bored. How dare we think that?

The end goal is to take a vow.

Even though not all of the successful couples from The Bachelor franchise have ended up engaged, the contestants have to continually prove that they are ready for marriage and want to make that a vow.

It's the same concept on the other end of the spectrum—but instead, the long-term end goal is to take an oath of office as the President of the United States. Both come with high stakes, wearing a white item of clothing, and hand-holding. As you can see, the similarities are there. It just took this article to prove it.