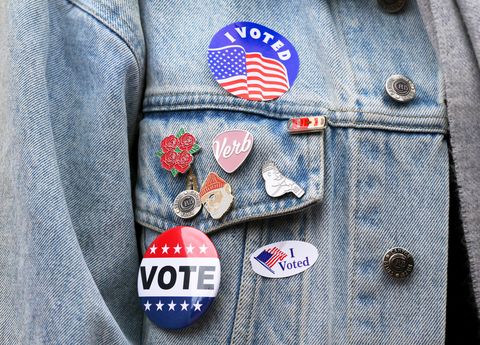 It’s been more than a year (and it’s felt like 10) since the Democratic candidates launched their presidential campaigns, but for Americans in 14 states, it’s finally time to vote. A third of all delegates will be awarded on March 3, Super Tuesday, which has the potential to be one of the most consequential days of the presidential primary.

Even after 15 years as a Democratic strategist, I’ve felt overwhelmed by the sheer size, complexity, and importance of the 2020 presidential election. I know from hard-fought political battles—I’ve been a part of efforts to defend the Affordable Care Act, repeal Don’t Ask, Don’t Tell, and elect women to flip the New York State Senate in the 2018 midterms—but I’ve never seen anything like this primary. To help myself wrap my own head around this circus that is politics, I’ve spent the past six months interviewing experts including Stacey Abrams, Nancy Pelosi, and Hillary Clinton for podcast-slash-primary-survival-kit “Your Primary Playlist.” And I’m sharing what I’ve learned from these women and from my own experience so that you can go into the voting booth prepared.

Know where the candidates stand on each issue

Defeating Trump is understandably a top issue for Democratic voters, but replacing conversations about the issues with those about electability hasn’t actually helped us pick a competitive nominee. If “electability” basically means trying to predict how your neighbor is going to vote, estimating electability based on their gender or sexual orientation ignores that many Americans do vote on issues: healthcare, gun control, climate change, etc.

I sought out experts in each issue area who have the depth of knowledge necessary to compare candidate platforms without resorting to electability tropes—experts who are able to identify subtle distinctions between platforms that could have a major policy impact.

For example, Cecile Richards, the former Planned Parenthood president whom I interviewed about the candidates’ positions on abortion, explained that while all of the Democratic candidates support codifying Roe v. Wade, former Vice President Joe Biden and Representative Tulsi Gabbard haven’t come out in support of requiring judicial preclearance for state abortion laws, and Biden and Senator Amy Klobuchar would place greater restrictions on late-term abortion than the other candidates.

We also need to seek out policy proposals that account for the intersections between issues, argued environmental policy expert Tiernan Sittenfeld of the League of Conservation Voters. “Climate change touches everything,” Sittenfeld said, citing Senator Warren’s plan to revitalize American manufacturing through a transition to green jobs. “Whether the candidates are talking about the economy, national security, public health, or racial justice, really we can’t be talking about any of these issues without talking about climate impacts and climate solutions.”

There are many other resources available to help discern where the candidates stand, including Marie Claire’s 2020 Election Guide and issue guides from POLITICO, The Washington Post and The New York Times.

Find trusted information sources that address your priorities as a voter

Russian interference in the 2016 presidential election provoked a national conversation about targeted misinformation campaigns in politics that’s even more important in 2020. Layer this on top of the existing biases of American political media, whose make up veers white and male, and it’s hard to know where to turn for information. It’s more important than ever to find fact-based sources of political coverage that are concerned with the issues that matter to you.

This is harder for women, who are still underrepresented in political media despite being the majority of voters in every national election of the past 40 years. A 2019 report from the Women’s Media Center identified that 63 percent of news is reported by men, and that even when women are hired, they are more likely to be siloed in health, lifestyle, and leisure reporting.

All the interviewees featured on “Your Primary Playlist” are women. I made that choice consciously in order to lift up some of the women steeped in political work who are less likely to get a platform to talk about it. For example, Dr. Alice Chen gave a physician’s perspective on the healthcare debate within the Democratic party, and Rent the Runway CEO Jennifer Hyman explained how her experience having children informed her company’s generous family leave policies.

Political coverage can’t be comprehensive if it overlooks women’s perspectives. I’m consistently impressed by 2020 coverage from women including Joy Reid, Norah O’Donnell, and Ali Vitali, whose Instagram stories give an up-close-and-personal look at what it’s like to be a young woman on the campaign trail.

It’s also crucial to work against racial imbalances in media. The U.S. Census Bureau found that racial and ethnic minorities make up less than 17 percent of newsroom staff despite being 40 percent of the U.S. population, which is especially inadequate in the context of left-wing political coverage given that black women are among the most critical Democratic voters. I recommend A’Shanti F. Gholar’s podcast and blog “The Brown Girls Guide to Politics,” which she founded after recognizing the dearth of political coverage by and for women of color, and Blavity, a news site co-founded by Morgan DeBaun—both are among the few media companies founded by women.

Ensure that you are able to vote

Exercising your right to vote is both harder than you might expect and harder than it should be. Seventeen million Americans were purged from voter rolls between 2016 and 2018, and hundreds of thousands more will be removed from Georgia and Wisconsin’s voter rolls this year.

Stacey Abrams explained that the right wing’s targeted voter suppression efforts are motivated by the growing electoral power of marginalized communities, especially communities of color. “What's terrifying the right—and the right is the side of the aisle that is the most pervasive user of voter suppression—it's a fear that once these communities have power, that they'll use it.”

So how can you make sure you’re able to exercise your power? It may not sound sexy, but the best way to combat voter suppression on an individual level is to get really, really organized.

First, check out this guide to voter registration deadlines and use resources like Vote.org to verify or update your registration status, find your polling place, and request an absentee ballot if necessary. Keep in mind that requirements for voting vary state-by-state: In the 20 states with fully or partially closed primaries, you may need to register with a political party to vote in its primary. If you live in one of the 39 states with early voting, getting your ballot in ahead of time minimizes room for error on election day and even frees you up to volunteer at the polls.

Voting is easier when it’s a team effort. Many campaigns or state parties will help you make a plan for voting and find you a ride to the polls. As you plan ahead regarding transportation and childcare, coordinate with friends and family. If you’re already driving to the polls, offer rides to friends or plan to go vote together before getting Ben & Jerry’s and watching Cheer.

The experts I interviewed stressed that if there was ever a year to get involved, it’s this one. Beyond casting an informed vote, look for ways to organize, donate, knock doors, and engage new people in the political process. Organizations like Swing Left and Supermajority can help you determine where to invest your time for maximum impact.

When I feel overwhelmed by this primary (which is a lot of the time), I remind myself that grassroots efforts really can translate to major change. As Nancy Pelosi said to me in my very first podcast interview, “Women marched, now women must run. Women ran, women voted, and women got elected. And now women lead.”

Related Story
This Woman Is Saving Democracy from Russian Trolls
Emily Tisch Sussman Emily Tisch Sussman is a veteran Democratic strategist and podcast host of Your Primary Playlist, a guide to the 2020 presidential primary explained by the women who know it best.
This content is created and maintained by a third party, and imported onto this page to help users provide their email addresses. You may be able to find more information about this and similar content at piano.io
Advertisement - Continue Reading Below
More From Politics
Important 2021 Elections to Keep on Your Radar
Lisa Murkowski Hints She'll Vote to Convict Trump
Advertisement - Continue Reading Below
AOC Calls Out the Hypocrisy of "Blue Lives Matter"
All Your Qs About Biden's Inauguration, Answered
President Donald Trump Was Just Impeached, Again
Teleabortion: A Bitter Pill
Cori Bush Decries GOP Refusing Safety Protocols
AOC Thought She Was Going to Die Inside Capitol
Attorney General Letitia James Takes on the World
Can Trump Be Impeached After Biden's Inauguration?