Premiering on August 23, HBO's new documentary series The Vow dives deep into NXIVM (pronounced "Nexium"), the organization that billed itself as a self-help and discovery group and made headlines when whistleblowers alleged physical, sexual, and emotional abuse against its members. Some of the more severe allegations included women being branded as part of a secret, ritualistic "sex cult" that existed within NXIVM. Since the allegations surfaced, several NXIVM members have been arrested. Keith Raniere, the founder of NXIVM, touted as a guru-like figure with a (supposedly) extremely high IQ, has already been convicted of several crimes and is awaiting sentencing in New York.

Raniere said that his vision was for NXIVM to heal people's suffering and allow them to be forces for good in the world. His techniques ("technology") were designed to break people out of their emotional patterns and traps by "rewiring" those emotions.

The classes were popular with celebrities and public figures, including actors Grace Park (Battlestar Gallactica), Kristin Kreuk (Smallville), and Allison Mack (Smallville) as well as heir to the Seagram liquor fortune Clare Bronfman, who became a high-ranking member of NXIVM. Park and Kreuk later left the group.

Several former members now allege that the group's work was, in fact, conditioning to break down a member's self-esteem and to acclimate them to a system of punishment and reward. Recruiters say in the series that they were asked to look for survivors of sexual assault, people with money, and those with insecurities.

Classes were expensive—former member Sarah Edmondson recalls the first class as $5,000—and members earned sashes as they progressed through the ranks. They did this in part by recruiting other members. NXIVM has since been described as a pyramid scheme, and former members have sued Raniere and 14 other NXIVM members. In fact, Raniere had settled out of court for creating a pyramid scheme earlier in his career.

What was DOS, the secret society within NXIVM?

DOS (short for Dominus Obsequious Sororium, "lord over the obedient female companions," and also referred to as the Vow) was a secret, female-only society within NXIVM. When invited, women were told to hand over collateral—information that, if released, would be damaging to the person, such as nude photos, passwords, or family secrets. Initiates were branded with a cauterized mark on the groin that formed the initials KR (Keith Raniere) and sometimes included AM (Allison Mack, believed to be second-in-command at NXIVM and who says she came up with the branding idea), forced to follow the orders of the woman who invited them (their "master"), and entered into a "slave" relationship where they counted calories, punished themselves, were sent more collateral, and in some cases were told to seduce or enter into a sexual relationship with Raniere.

As read aloud during the trial, the DOS rulebook enforced that relationship: "Your sole highest desire must be to further your Master from whom all good things come and are related," per an opening passage. "The best slave derives the highest pleasure from being her Master's ultimate tool...It doesn't matter what the command is, it matters that you obey. It doesn't matter that you understand the command, it matters that you obey." Former members say that Raniere was the grand-master and founder of DOS, although the secretive nature of the society kept other members from knowing about each other or talking about it freely.

How was NXIVM brought down?

In 2017, whistleblowers including high-ranking NXIVM members Sarah Edmondson and Mark Vicente went on the record for a New York Times article (Edmondson revealed the KR/AM brand on her groin as evidence of the group's practices). They continued to speak out about NXIVM and are interviewed for The Vow.

My birthday is always a strange thing. Celebratory in the sense that I am here, I am alive. I have survived so far. Then there's sadness at time gone by and memories… so many memories (‘SAUDADE' - as the Portuguese say) and then there’s the existential marker on the timeline of my life. Every birthday involves some massive introspective, existential examination. And yet, I could say this particular existential marker has been going on for 3 years: Help bring about Justice √ (check)  Lose  MANY cherished people I care about √  Turn my life upside down √ Regain my soul √ — But, there are gifts to these challenges and I am SO grateful. I now have a trusted circle of friends who know what it is to stand in the fire with me. I have incredible creative partners, people who champion me, and shoulders to cry on. I find myself immersed in an explosion of art and creativity like never before. I am so grateful to my Mother, who is still with me. My Grandfather, Grandmother and Fathers who long ago passed away. My heritage, both good and bad, has formed me. I am beyond fortunate to have my magnificent warrior of a Wife. Deep, profound, insightful and loving. Everyday, she fights for what is right and fights FOR me. Today, I know I am a very lucky man. I have been moulded in hot fire; stretched, folded, pounded, shaped and reshaped. I am glimpsing who I wanted to become so long ago. It was never about possessions, status, renown… wealth is now measured by the quality of friendship, soulfulness and love. Thank you to all of you! I AM BECOMING… I feel fibers of strength growing inside of me. Steely resolve and passion. There is no greater privilege than to materialize myself. So here I am at 55. Full of feelings, fire, piss and vinegar, longing, joy, laughter, humor and gratitude. Photo @bonniepiessephotography

Charges were brought against Raniere in 2018 and he was arrested in Mexico; he pled not guilty to sex trafficking, forced labor, and other crimes. Mack initially pled not guilty but later apparently changed her plea, pleading guilty to racketeering conspiracy and racketeering in 2019. At the trial, she apologized and cried, saying, "I believed that Keith Raniere’s intentions were to help people, and that my adherence to his system of beliefs would help empower others and help them...I was wrong." She's awaiting sentencing, and if convicted faces up to 20 years in jail.

Edmondson has also gone on to write a book about her experiences.

“The stuff of suspense and terrific drama, combined with the agony of witnessing humans at their most vulnerable, angry, and disrespected…. #Scarred documents that [Sarah] has hit the reset button on a life where she is now in control.” Thank you 🙏to Nathaniel Moore for reviewing my #book for #TheOrmsbyReview. Sharing my story and receiving support is one of the best gifts I have received this year. #NXIVM #author #memoir #truecrime #bcbooks #readlocalbc @krissy.g.writer @carabedick @wizpower @chronicleprism @raincoastbooks @vervetla https://ormsbyreview.com/2019/12/21/706-moore-edmondson-escaping-a-cult/

Raniere was convicted of racketeering and sex trafficking in 2019 and is being held in Brooklyn's Metropolitan Detention Center; He faces up to life imprisonment and his sentencing is scheduled for October as of now.

According to Vicente, a group that's been hosting dances every night for inmates and in particular to remember "Kay Rose" (no prisoner exists with that name there, but they could stand for the initials K.R.) is in fact a "cover movement" for NXIVM members who are still loyal to Raniere. 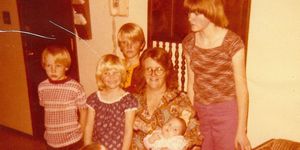 How I Escaped from a Polygamist Cult
Katherine J Igoe Katherine’s a Boston-based contributing editor at Marie Claire online who covers celebrity, fashion, entertainment, and lifestyle—from “The Bachelor” to Everlane to Meghan Markle.
This content is created and maintained by a third party, and imported onto this page to help users provide their email addresses. You may be able to find more information about this and similar content at piano.io
Advertisement - Continue Reading Below
More From Culture
The Cast of Grand Army Are BFFs IRL
A Look Back at Princess Anne's Life in Photos
Advertisement - Continue Reading Below
Who's in 'The Queen's Gambit'?
'After We Collided' Stars Play Trivia With Us
'The Crown' Season 4 Is Coming So Soon
It's Been a Weird Year for 'The Bachelorette'
Who Plays Townes in 'The Queen's Gambit'?
The Best Korean Dramas to Get You Hooked
To Save Victims, We Must Dismantle Purity Culture
Will There Be a Season 2 of 'The Queen's Gambit'?