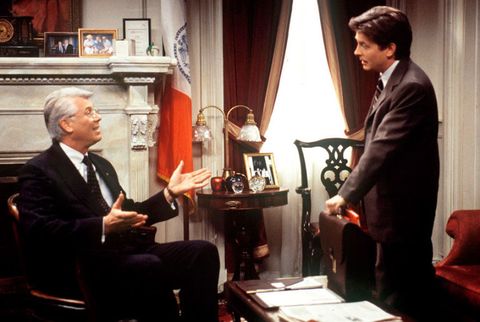 It's an exciting time to be a political junkie, and not just because it's an election year: Hollywood has suddenly gone gaga for politics.

On the heels of this year's TV shows Veep, Scandal, and Boss — and Julianne Moore's awesome Sarah Palin impression in the film Game Change — comes summer's USA miniseries Political Animals and Will Ferrell's movie The Campaign, and next season's NBC satire 1600 Penn. If you don't know what a filibuster is, you will soon.

It hasn't always been this way. There was a time when The West Wing and Spin City were the only games in town, and no presidential movie has been a contender for an omnipresent Saturday-morning cable loop since The American President.

"I love that Washington — and politics in general — is becoming its own genre, like cops, doctors, and lawyers," says Allison Abner, a former West Wing writer. "For a long time, there was a lot of political apathy. Now people are civically involved, which makes it easier to sell these ideas."

Still, it's hard not to feel nostalgic for the golden era of 1990s and 2000s political TV shows and films, which managed to be whip-smart and idealistic — even romantic! — about things like the Comprehensive Nuclear Test Ban Treaty. Now on-screen politics is all cynicism and soap. And the most popular political shows traffic in the farce of fake news like The Colbert Report and The Daily Show.

Maybe we got jaded when Obama didn't turn out to be a superhero like President Jed Bartlet. Or perhaps Hollywood writers don't know how to cater to viewers who are politically in touch but who still want to be entertained. "I heard a myth about a pilot that had Supreme Court clerks in a hot tub," Abner says. "That doesn't reflect reality."

Though some shows are getting it right, at least according to Beltway insiders. MSNBC's Chris Hayes, for example, loves Veep. "People from a distance might look at your life [in Washington] and imagine you on the inside, in the room when decisions are made," he says. "But the experience for basically everyone in D.C. who isn't the president is the feeling of exclusion, envy, and powerlessness. Veep nails that."

While the show may not inspire Aaron Sorkin — style optimism (and it may not be super-funny to outsiders, either), it's along the lines of what former George W. Bush Press Secretary Dana Perino thinks there should be more of: "We'd all benefit from seeing Washington in a light where not everyone takes themselves so seriously — or at least are exposed as ridiculous when they do." If all else fails, there's always C-SPAN.

Political Movies That Get It Right Great films about government

All The President's Men (1976) Robert Redford and Dustin Hoffman take down Richard Nixon. It sets the bar for political thrillers.

Bob Roberts (1992) Tim Robbins in a mockumentary about a folksinger's corrupt senatorial run. The pitch is perfect on both politics and entertainment.

The American President (1995) Michael Douglas and Annette Bening in the White House. It's a dream Aaron Sorkin made a reality.

In the Loop (2009) The spin-doctoring that happens when the U.S. president and U.K. prime minister want a war. The wry dialogue is addictively quotable.

The Ides of March (2011) Based on Howard Dean's '04 prez run, it stars Ryan Gosling and George Clooney, with Evan Rachel Wood as collateral damage.