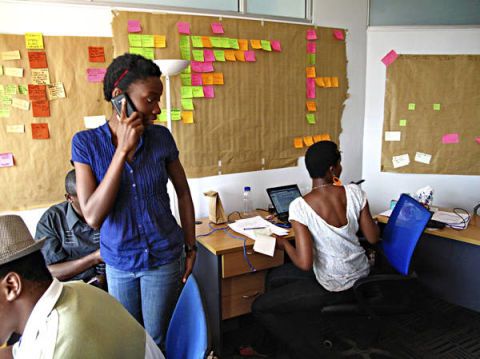 Africa-A region long seen as poor and disconnected—has plugged into the Web in a big way. Mobile-phone applications, hardware hacks, and trending Twitter topics are commonplace in Nairobi, where a high density of tech evangelists has earned the Kenyan capital the nickname Silicon Savannah. And increasingly, African women are driving this renaissance.

The first sight upon entering Nairobi's Bishop Magua Centre—ground zero for tech startups in Kenya—is an airy workspace that used to be a women's shoe store. Gone are the stilettos; today the storefront belongs to AkiraChix, an all-female collective of self-proclaimed geeks. Marie Githinji, 29, Judith Owigar, 28, Linda Kamau, 27, and Angela Odur, 25, founded the group in 2010 to increase the number of women in the African tech industry.

But like female pioneers in Silicon Valley, these women didn't see others coming up behind them. While the most connected communities in Africa enjoy gender parity, women in sub-Saharan Africa are 45 percent less likely to be online, let alone pursue a career in tech. "We realized that there was a knowledge gap—high school girls simply do not know the opportunities that exist in the technology world," says Wangechi Mwangi, 20, an AkiraChix member.

To close the gap, AkiraChix teaches entrepreneurship and programming skills to young women. "So many businesses use technology or computers," Githinji told one group of women. "You have to be relevant." Nairobi's young women are taking notes.

45: On average, the percentage fewer women than men who have Internet access across sub-Saharan Africa. —Intel, Dalberg, and Globescan "Women and the Web," (2013)

40: Percentage of women in the developing world who don't use the Internet because they lack familiarity or comfort with technology. —Intel, Dalberg, and Globescan "Women and the Web," (2013)

$13-$18 billion: The estimated annual contribution to the GDP of developing countries if more women were online. —Intel, Dalberg, and Globescan "Women and the Web," (2013)