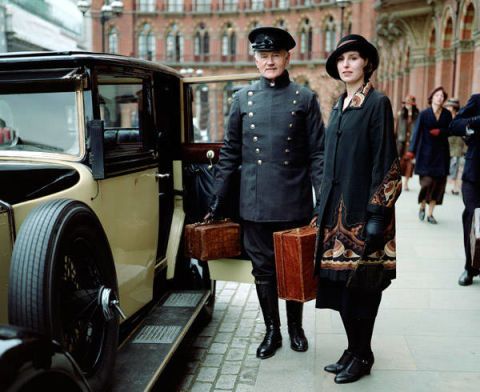 SPOILER ALERT! Do not read on if you are not up to date with season 4 of PBS' Downton Abbey.

As a pop-culture fanatic and a steadfast supporter of a woman's right to choose, I pay close attention to how TV shows and films handle the topic of abortion when they decide to raise it. And I'm somewhat disappointed in Downton Abbey for its handling of the matter, though I'm not surprised.

Surely you can guess which character is considering an abortion: Lady Edith, who's been wringing her hands about her knocked-up-edness and her missing lover for the past few episodes. Now, with Aunt Rosamund by her side, Edith feels emboldened to seek out a London doctor offering the procedure, which actually was not totally illegal at the time in England. At the physician's office, Edith hears and sees a woman crying and dramatically bolting from the doctor's offices, saying, "I can't."

Downton is hardly the first show to play chicken with this particular topic and swerve at the last minute: the show joins the ranks of Melrose Place, Felicity, The O.C., Dawson's Creek, Juno, Sex and the City, and Knocked Up, among other narratives in which an abortion-considering character either decides against it, or a complication like miscarriage or an ectopic pregnancy makes the decision moot (although Carrie confesses to having had an abortion in that episode of Sex and the City, and Samantha says she's had two). And the characters who face the decision are usually not leads—they're secondary or tertiary. Cristina Yangs and Miranda Hobbeses, or the dirty-doctor-seeking Pennys a la Dirty Dancing—not Lady Marys or Felicitys.

Very few screenwriters and showrunners are as bold as Shonda Rhimes, who goes ahead and lets Cristina have an abortion on Grey's Anatomy, even after the character is threatened with divorce (several seasons after Cristina considers an abortion during a different pregnancy, and winds up in the hospital with an ectopic conclusion). Or director Stephen Irwin and comedian Jenny Slate, whose The Obvious Child (which just premiered at Sundance, after a short version garnered acclaim in 2009) tells the honest, nuanced story of a hipster chick's decision to get an abortion. Now, those 2 in 7 or so depictions of "going through with it" without grave consequences—a ratio that would be much wider if we did a scientific tally—is hardly representative of the estimated 1 in 3 American women who will have an abortion in her lifetime. So why are shows and movies afraid to "go through with it" themselves?

Because of the stigma. Because the beloved character would carry a moral stink. The truth—that no woman delights in her abortion, but neither is she necessarily forever haunted, just read New York magazine's feature of 26 personal stories—would be much harder to grapple with in the confines of a writer's room and 60 minutes (or less) of script. Wouldn't we rather enjoy our Edith as she is, progressive but not too intellectually dangerous, either to her family or to the viewer? To make her offensive after such a long run as the underdog would just be so unfortunate.

Let me be clear: I'm thrilled for Edith to have a choice. That is precisely the thing I support. But to continue to portray characters as choosing a higher moral road by not having an abortion somehow lends credence to the idea that abortion is wrong—and, hey, then maybe it should be illegal. I wonder if maybe the creative minds we so love and admire can't "choose" to represent a fuller spectrum of narrative outcomes, if they're going to bring it up anyway. Until then, I'll be looking forward to seeing The Obvious Child in wide release.