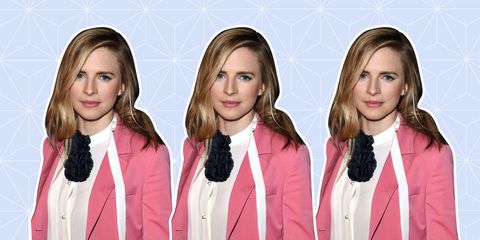 Gilmore Girls is over, Trump is president-elect, and we're living in a reality where Kanye West might become an ambassador. In other words, we need the comforting embrace of escapism more than ever, so thank god (sorry, Beysus) for Netflix's new show The OA.

The Brad Pitt-produced eight-part series dropped today, and if you're binging it as fast as we did, chances are you're searching for answers. MarieClaire.com spoke to The OA's creator and lead actress Brit Marling, and got intel on loose ends getting tied next season, what it's like working with Pitt, and why TV is paramount in these post-apocalyptic (er, post-election) times.

Marie Claire: Do you feel like viewers will rely on shows that deal with fantasy and escapism more than ever now that the political and social situation in this country is so massively depressing?

Brit Marling: "We need storytellers now more than ever, because we also need to find a light in the dark when things get really complex, overwhelming, and scary. If you look back in history, when a single play or a novel has contained an idea that's important, it's like somebody lighting a lantern. You can suddenly see out of the dark, and you're a little less afraid. Stories have the power to make you feel like you're not alone. They validate your feelings and extend your empathy. Especially now, it's a really important medium. We need storytellers to entertain, but also to talk more honestly about the time that we're in."

MC: The OA is heavy on dance movements choreographed by Ryan Heffington [edit]. Were they uncomfortable at first? They're so sincere on the show, but were there moments that you broke down laughing?

"Stories have the power to make you feel like you're not alone. They validate your feelings and extend your empathy. Especially now, it's a really important medium. We need storytellers to entertain, but also to talk more honestly about the time that we're in."

BM: "We live in a culture that's very from the neck up—we're all in our heads all day long. The real power of learning/performing the movements was that we had to drop out of our heads and into the rest of our bodies. You're a little embarrassed at first, it's strange. But the more we were doing them as actors over the course of many months, the more we found it's a very powerful way to express yourself. There's a moment where Homer and OA have a classic lover's fight, but instead of doing it with words like 'I can't believe you cheated on me!' you're doing it all with body language. That's a powerful thing to explore."

MC: The OA claims she's an angel who can move through dimensions when she has Near Death Experiences, but there's some doubt about her story. Will we find out whether or not she's telling the truth next season?

BM: "When you make a story, you spend all this time with it and invite all these collaborators in, and then surrender that story to the world. The audience tells you what it meant to them. I would never want to deprive anyone of their interpretation of the ending. The thing I will say is this: if we should be so lucky to have a season two, there are answers to all of the questions. That's the delicious thing about the gap between seasons. People watch and take it in, revel in the mystery, argue about it online. And then, if they should be so lucky, the storytellers get to meet the audience when the story continues."

MC: How did you end up casting Phyllis Smith from The Office? That was such a brilliant move.

BM: "She's so wonderful, I cannot say enough good things about her. She's so wildly talented and moving in the season. We saw Inside Out, where she's the voice of Sadness—and when you listen to that performance it's so sophisticated and there are so many deep feelings, but she never has pity for herself. It's the type of sad you can connect with, but not the sad that pushes you away. Zal met with her first and was like, 'you have to meet Phyllis, she is transcendent, she can totally embody this character.' When I met with her, I felt the same thing."

MC: How involved was Brad Pitt in the production? It must have been exciting to get him on board for the show.

BM: "Zal and I spent a couple years dreaming up this story, and then we met Plan B [Brad Pitt's production company] and they were so extraordinary. They really understood the story and gave great notes. Brad read the script, and I think he's somebody who is a risk-taker. If you look at his career as an actor you see him taking on challenging and interesting parts. He's always trying something new, different, and edgy. I think he felt like this was something out of the box; episodes of varying lengths, some of the main characters don't come on until later—I think there's a lot The OA's trying to do that's different in form and content. He felt excited by all that."

The OA is currently streaming on Netflix.