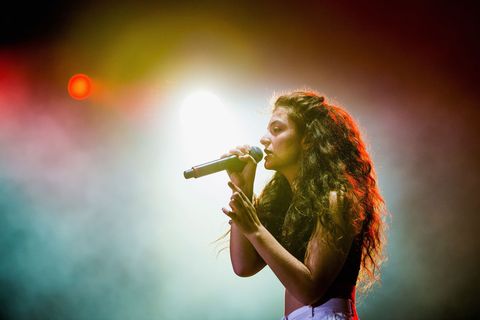 Lest you had forgotten, Lorde's debut album Pure Heroine was spellbinding. So much so, in fact, that even the rejected tracks are magical, as today's release of the never-before-heard "Lost Boys" proves.

"Found this little guy whilst trawling through my archives and thought it would be a cute thing to share with y'all," Lorde wrote today on her Tumblr when she shared the song. "We spent a day on it and then never touched it again (it was not a good song, I promise, haha)."

We beg to differ. The track is what we know now to be quintessential Lorde—those simultaneously powerful and breathy vocals over a stripped-down, synthy beat.

"A lot of people asked what happened to 'Lost Boys,' and I guess you'll never hear the other three-quarters of the song, but there was something about these bridge melodies I thought was pretty," she continued. "So here you go—a little pre-Christmas look at the cutting room floor."

Don't mind if we do! Listen to the clip here.

The Lorde Remix You Need to Queue Up for the Weekend

Lorde's Hidden Talent Will Shock You

Lorde is Everything We Wish We Were in High School

Lauren Valenti Associate Web Editor I’m the associate web editor at Marie Claire.
Advertisement - Continue Reading Below
More From Culture
An Investigation Into the Next 'Bachelorette'
The Best Korean Dramas to Get You Hooked
Advertisement - Continue Reading Below
Who Is 'Bachelor' Contestant Victoria Fuller?
Everything to Know About Peter Weber's Ex
Read an Excerpt From the Uber Whistleblower's Book
The Must-Watch TV Shows of 2020
Candice Marie Woods on Playing Diana Ross
45 Iconic '90s Movies to Binge-Watch Right Now
You Can Get a ‘Golden Girls’ Birthday Party Kit
Meet the Star of 'The Bachelor's ChampagneGate