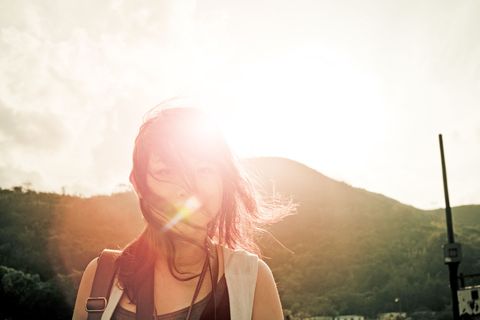 It's a sunny fall Sunday morning in September, and I'm rolling on wet grass in upstate New York with 40-odd other grown adults. We're doing somersaults—a move I haven't attempted since adolescence. After several hours of "readaptive conditioning and training," as our teacher, Daniel Vitalis, calls this series of exercises he's leading us through, I've stretched muscles I didn't remember I had. Vitalis says we're mastering "primal movements" that will help us "overcome limitations imposed by our modern industrial lifestyles"—you know, the all-day sitting that we've been told will ultimately shorten our lives.

This grass-rolling topped off a weekend learning about "ReWilding," a new health and lifestyle philosophy that Vitalis created, developed, branded, and promotes. Believer Shailene Woodley told Time magazine last June that "90 percent of how I live my life is because of him." Like its more mainstream cousin, the Paleo, or "caveman," diet (in which adherents give up grains, dairy, and processed foods), ReWilding is based on returning to a hunter-gatherer way of life. While I haven't taken up the Paleo mantle, Vitalis' vision of aligning "with our authentic biological selves" appealed to me. Hunching over a laptop all day and eating supermarket food flown in from God-knows-where never struck me as an ideal recipe for well-being.

So on a sprawling 40-acre estate, I found myself among an eclectic crew of health enthusiasts, ages 20 to 65, from all over the country, eager to equip themselves with the know-how to successfully adopt Vitalis' "feral mind-set." (Uncomfortable with patriarchal lineage, the 36-year-old Vitalis chose his current last name in his mid-20s because it means "life force," he told us.) He speaks at health conferences across the country and employs seven people at his company, SurThrival, which sells supplements such as pine-pollen powder for hormonal balance and elk-antler concentrate for joint health, along with ReWilding gear like neti pots for sinus cleansing and "forager's cologne" (insect repellent).

After our Friday dinner of just-slaughtered chicken, we converged to hear Vitalis, a short guy with a stocky and muscular build, lay out his philosophies. "You grew up on kibble for domesticated factory-farm humans," he said. The overconsumption of wheat, and other domesticated crops, "represents us leaving behind nature.

"To thrive, we need to replicate the habits and traditions of earlier humans"

"To thrive, we need to replicate the habits and traditions of earlier humans: drinking water from natural springs, not from the tap or a bottle, which can leach contaminants into the water; eating from four different kingdoms—animal, plant, bacteria, and fungi; getting fresh air and regular sun exposure; bathing in hot springs or using an infrared sauna to rid the body of pollutants; and, finally, squatting on the toilet, societal norms be damned. This wasn't just about making specific changes to my lifestyle; it was about regaining a personal sovereignty that my fellow modern humans and I had been robbed of by the nefarious ways of the civilized world. OK.

I'd experienced my weekend-long indoctrination. Now I was ready to spend a month ReWilding.

First, I had to find spring water straight from the source. Neither of the two springs closest to my home in Washington, D.C., had been where the map on Vitalis' findaspring.com website had indicated. I'd have to fall back on my contaminated tap water.

I became that person at restaurants asking if the meat and fish on the menu were organic and local.

I became that person at restaurants asking if the meat and fish on the menu were organic and local. But I mostly cooked—which my husband enjoyed—since that's the only surefire way to know what's going in your body. I made chicken soup from scratch and swapped dairy for my own blended nut milk and fresh juices. I drank kombucha (fermented tea) nearly every day; Vitalis promotes it because it involves two different kingdoms, fungal and bacterial, working in harmony. I kicked my Diet Coke habit and cut out foods with unnatural preservatives and processed sugar, like my beloved ketchup and barbecue sauce (sigh). I bought a couple of aloe vera plants and used the gel straight from the leaves in nut-milk smoothies. Ultimately, I became hypercritical of what I ate: If it wasn't providing a needed nutrient, I nixed it.

I kept my windows open to allow fresh air to circulate; cleaned the apartment often to minimize particles that would compromise the air quality; and bought an ionizer, a machine that produces negatively charged ions that supposedly rid the air of pollutants and allergens like pollen and bacteria. The ionizer didn't go over well with my husband, who thought it made him sneeze. I spent a half hour on my deck every day to catch some rays, sans sunscreen. (Skin cancer, Vitalis says, is often the result of going from pale to burnt and using toxic sunscreen.) And, yep, I used a Squatty Potty—a stool for a modern toilet that enables you to relieve yourself in a squatting position. It felt awkward, but I got used to it quickly, and it actually did make my private business easier. My husband, on the other hand, found it ridiculous.

For the equally important detoxing routine, I used a neti pot and clay toothpaste daily and went to an infrared sauna twice. Similar to the ionizer, clay's negative charge is purported to attract positively charged toxins in the body and help flush them out, while heat from the sauna penetrates into skin to help sweat out toxins. It was hard to tell whether either made a difference, but any excuse for sauna time is OK by me.

After a week, I felt significantly less bloated than I usually do. My sinuses felt clearer.

After a week, I felt significantly less bloated than I usually do. My sinuses felt clearer. My husband caught a cold and couldn't kick it; I never got it! For years, I've taken Claritin for my chronic allergies, but I read up on natural antihistamines and used nettle leaf instead. My energy levels felt much more stable.

I'd secretly hoped my new lifestyle would translate into a completely radiant and rejuvenated self. That did not happen. But I did feel much healthier and empowered to take better control of my well-being, even if these practices were expensive and sometimes hard to stick to. Most exciting is a mental shift, knowing that I don't always need to outsource my health care and can experiment with natural remedies. I'm planning to keep ReWilding, despite the ridicule I've endured at home thanks to the Squatty Potty. And I now have a more holistic perspective on nutrition, one that goes beyond food, into the wild.

This article appears in the January  2015 issue of Marie Claire.

The Ultimate Health Guide to Getting Good Skin

Is Job Stress Making You Sick?