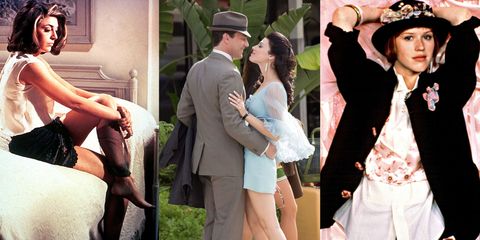 Everything's going to suck weather-wise from now until May, so there's really no option left but to become shut-ins—the chic kind like Little Edie or that painter from Amélie who was obsessed with Renoir. Netflix is doing everything short of providing free headscarves with every subscription to get us to succumb, especially now that we've seen what they're offering next month.

Some highlights: Pretty in Pink (#TeamDuckie4ever), The Graduate, Honey, I Shrunk the Kids, Mad Men Season 7, and Unbreakable Kimmy Schmidt, the Tiny Fey comedy that's going to be unbearably adorable, judging by the trailer.

March 11
How to Train Your Dragon 2

March 17
You're Not You
Dummy

March 31
Ask Me Anything
The Man With the Iron Fists

Chelsea Peng I'm Chelsea Peng, the assistant editor at MarieClaire.com.
This content is created and maintained by a third party, and imported onto this page to help users provide their email addresses. You may be able to find more information about this and similar content at piano.io
Advertisement - Continue Reading Below
More From New On Netflix 2020: What To Watch Now
What Happened to the 'Chicago 7' After the Trial?
The Saddest Romance Films on Netflix
Advertisement - Continue Reading Below
The Scariest Movies on Netflix
Fans Are Clamoring for a Second Season of 'Away'
The Best Halloween Movies on Netflix
Meet Your New Favorite Dating Show
The Best Romantic Movies for Every Vibe
The Best Rom-Coms Netflix Has to Offer
The New Ted Bundy Film Has a Release Date
The Perfect Netflix Movie for Every Valentine