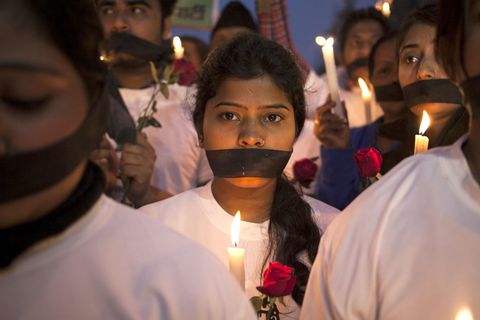 Get ready to be shocked, irritated, annoyed and confused—all at once. India's Daughter, a documentary film about the 2012 Delhi bus rape case that took the world by storm is now causing a furious global uproar of its own. The film, which was originally supposed to air this Sunday on International Women's Day, was banned by Indian officials after excerpts released for the film's publicity campaign showed one of the convicted rapists making horrifying comments. In response to the ban, BBC pushed the release date forward and aired the documentary on Wednesday night, which was then uploaded by users to YouTube. Clearly, Indian government officials are pissed.

Activists around the world are split on whether the film highlights troubling misogynistic attitudes in India or whether it gives Mukesh Singh and other rapists a glorifying public platform.

"A decent girl won't roam around at nine o'clock at night. A girl is far more responsible for rape than a boy," Singh says in the film. "Housework and housekeeping is for girls, not roaming in discos and bars at night doing wrong things, wearing wrong clothes. About 20% of girls are good. When being raped, she shouldn't fight back. She should just be silent and allow the rape."

On the night of December 16, 2012, Singh and five other men violently raped and beat 23-year-old student Jyoti Singh on a moving bus in Delhi. She was coming back from a film with a male friend. She died of internal injuries a few weeks later.

According to the Guardian, nearly 300,000 people watched India's Daughter after its Wednesday night broadcast. The video also went viral on YouTube and has been widely shared around the world. In a statement, Youtube said that it had complied with a request to take down the page hosting the documentary, but users quickly posted other links to versions of the film, the BBC reports.

On Twitter and Facebook, those opposing the documentary have been tweeting #banBBC. The hashtag has been mentioned more than 13,000 times, according to a BBC report. But others applaud the documentary and have even asked the Indian government to reverse the ban in a Change.org petition.

In an interview with BBC on Thursday, filmmaker Udwin says, "I went out there not to point a finger at India—the opposite, to put it on a pedestal, to say not in my life have I seen another country go out with that fortitude and courage the way the Indian nation did. Unfortunately what this ill-advised decision to ban the film is now going to do is have the whole world point fingers at India."

The original version of this article stated that BBC uploaded the film to YouTube, which is not the case. A BBC spokesperson said: "The BBC has only broadcast the documentary, and made it available, in the UK. We have not uploaded it to YouTube. The independent production company which made the film is currently taking steps to remove illegal uploads."

A Step Forward in the Fight Against Rape: New York Police Open a Sexual Assault Hotline for Students

Study: 1 in 3 Men Would Rape If They Wouldn't Get Caught or Face Consequences