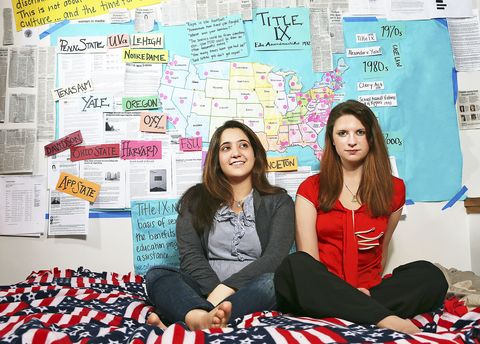 Long covered on feminist blogs and in women's media, the campus rape epidemic finally catapulted into the mainstream in 2014 with high-profile story after high-profile story. And now, as of today's Sundance premiere of documentary The Hunting Ground, rape survivors turned activists Annie Clark and Andrea Pino are at the forefront of a national movement for awareness and change.

Here, the End Rape on Campus founders open up about the film, the national attention, and the continuing campus-rape saga.

Marie Claire: How are you adjusting to being the faces of this movement?
Andrea Pino: On one hand, it's everything I wanted to do. I studied political science for a reason. My dream was to make social issues something that reached social consciousness. But at the same time, it's difficult to become a face of an issue no one wants to talk about. Not many people know just how bad it is, so you have to be the person who bears the bad news, "Oh, it's actually an epidemic and your child might be in danger." And then there's the fact that when you Google us, the first thing you see is that we're rape survivors. We sacrificed a life of normalcy. Sometimes I just want to walk my dog and not talk about rape.

MC: Several news reports called 2014 the year when colleges finally had to take rape seriously. Do you agree?
Annie Clark: In his book The Tipping Point, Malcolm Gladwell talks about tipping points in epidemics—I think we're there. Five years ago you might have heard about cases in isolation, but they were never really connected. It was a singular story, and it was a Jane Doe. There was an article that said 2014 is the year Jane Doe got a face and a name. But now not only do we know who Jane Doe is, we relate to Jane Does, we are Jane Does, and the Jane Does all know each other. We've seen federal legislation introduced to increase funding to combat sexual assault on campus, and the fact that you have Senators Marco Rubio (R-FL) and Barbara Boxer (D-CA) supporting the same bill—it's unheard of.

MC: What was your reaction to the Rolling Stone article about the University of Virginia  and the subsequent apology?
AC: When I first read the story, and this is actually pretty sad, but seeing everyone outraged and devastated was good—it was this righteous anger finally coming to a head. But as someone who has been working on this stuff for a while, I just thought, OK, well rape happens every day. It's also interesting for what it says about the retaliation against anyone who comes forward. Everyone tried to find holes in the story rather than look at the fact that UVA has been under investigation and has mishandled a myriad of sexual assault cases. Of course, journalistic integrity and fact-checking are very important, but everyone missed the point: rape happens every day and we need to figure out why and when it does we need to help survivors instead of blaming them and picking apart their stories.

MC: What do you say when detractors claim the movement is at the point now where men's rights are negatively affected?
AP: People just don't get it. I just think of the kid at Columbia [Paul href='https://www.marieclaire.com/politics/news/a13058/emma-sulkowicz-state-of-the-union/">Emma Sulkowicz'] and I'm like, "You're still on campus, dude. You're still graduating from an Ivy League university. I'm so sorry your life sucks and you can't get laid." I don't think people understand just how unequal the college experience is. People are like, "Men's rights are being violated," and I'm like, "They're not the ones who have to be afraid of going to the library at night or don't feel safe going by themselves to parties." When I go out, I have my phone in my hand and if anything happens to me, I'm going to record it. I stopped wearing heels to parties because they would make me more of a target. I think that sends a very clear message—the fact that I literally changed the way I present myself just so I won't feel like walking meat.

MC: Is that what the filmmakers were getting at with the title The Hunting Ground?
AP: Yes, exactly. The film shows how so many people are being preyed upon by predators who are given free rein.

MC: How did it feel being filmed?
AC: Working with director Kirby Dick and producer Amy Ziering [the filmmakers behind 2012's Oscar-nominated The Invisible War about sexual assault in the U.S. military] has been absolutely wonderful. But no matter how great the people are, having to relive your own trauma on camera has impacted me in a way that I never would have thought. Having your day-to-day life filmed and working with students and making sure everyone is comfortable—it's a difficult process. Knowing that you're going to have critics and get threats, it was difficult—but also incredible, because we were able to capture survivor activism in its moments of brilliance, heartbreak, struggle, and empowerment.

MC: What do you hope people take away from the film?
AC: I just want people who watch the film to recognize rape on campus for the epidemic that it is and that they have a personal responsibility and connection to the issue.
AP: People need to understand that it really does take everyone being active to make it something that actually gets any better. We need parents asking those difficult questions during college tours. You need alumni refusing to make donations until the issue gets better. You need constituents calling their representatives saying, 'I want you to take this issue seriously at our state schools.' And we're not there yet. So much of this has fallen on the backs of survivors still trying to graduate from college, trying to get up in the morning, and there are millions of people who could be helping.

A version of this interview will appear in the March 2015 issue of Marie Claire, on newsstands February 17. See The Hunting Ground in theaters on March 20, and watch a preview here:

Big Shame on Campus: A Report on the College Rape Crisis

Kayla Webley Adler Deputy Editor Kayla Webley Adler is the Deputy Editor of ELLE magazine.
This content is created and maintained by a third party, and imported onto this page to help users provide their email addresses. You may be able to find more information about this and similar content at piano.io
Advertisement - Continue Reading Below
More From Politics
Stacey Abrams on Her Definition of Success
Grand New Party?
Advertisement - Continue Reading Below
What Is Mutual Aid? For One, Not a Trend
How to Help Texans During the Winter Storm Crisis
Hate Crimes Against Asian Americans Are Rising
Anti-Trans Bills Are in the Works Across the U.S.
Vanishing Act
The Women Who Took on ISIS—and Won
Yes, Trans People Belong in Sports
I’m a Parkland Survivor. Rep Greene Must Resign