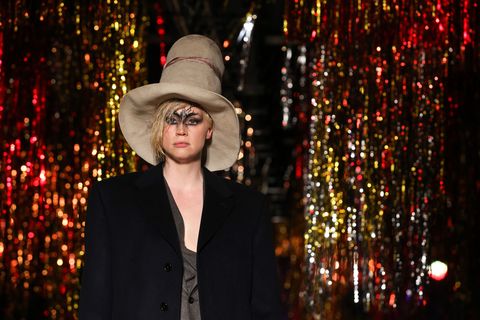 Talk about a fashion moment! Gwendoline Christie—who plays Brienne of Tarth in Game of Thrones—took to the runway for Vivienne Westwood's show in Paris and looked as killer as any warrior in Westeros.

The show and collection was a mix of genders, with clothes that had a unisex appeal—so it made sense that Christie was asked to walk, considering her character (a fan favorite) is a woman who can fight as well as any man.

Her height was obviously an asset on the runway, and the British actress (thankfully) has always embraced her frame. "I am 6'3" or 6'41/2", depending on when you measure me," she told the U.K. newspaper The Independent in 2008. "My parents treated my height as a wonderful thing to be celebrated, but also normal. I love being tall as you literally look at life from a different perspective: it's easier to breeze through life's turmoils; there's more room to breathe."

Christie will appear in the fifth season of Game of Thrones, premiering April 12 on HBO.

The Original Plot for 'Game of Thrones,' As Told By George R.R. Martin, Has Been Leaked Online