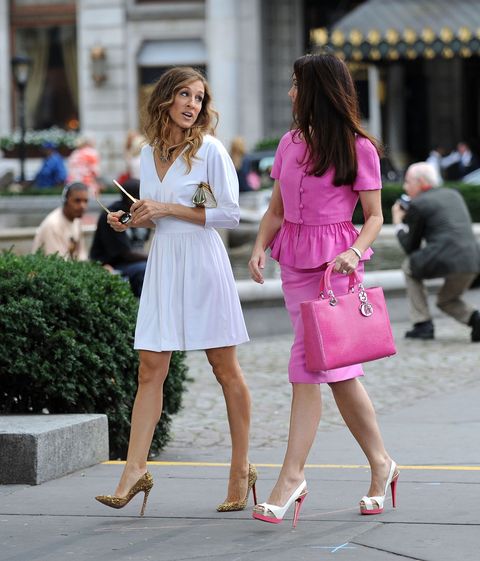 Fact: Women enjoy sex. And while some movies have helped society grasp the fact that fully realized women have sexual desires and sometimes actually do the deed (shocker!), other movies seem to operate in another era. Like...

Charlotte is worried about her husband's attraction to the new nanny, and only resolves the problem when she finds out that her nanny is a lesbian and therefore not a threat (gag). Samantha is terrified that menopause will destroy her libido and has wild sexual encounters that actually lead to her getting arrested. While this flick was far from a critical darling, it's also not doing us any favors in the women-aren't-actually-desperate/crazy arena.

A woman has a one-night stand, only to find out she has the interview of a lifetime the next morning and needs to get home—all without her car. This one was a hard one to include, as a) I love Elizabeth Banks b) the idea that the character feels no internal shame when it comes to her sexploits is fantastic and we're all about that. (Applause emoji). The crux of the movie, however, hinges on the idea that "good girls" stay in, while "bad girls" go out and wear skin-tight yellow dresses and hook up with guys. This seriously out-of-date idea of women is the basis for all of the jokes and is just, well, sexist.

Temptation: Confessions of a Marriage Counselor (2013)

This movie, created by Tyler Perry, is basically a PSA against infidelity. After a marriage counselor grows apart from her husband, she gives in to her feelings for a client and begins an affair. The movie takes a turn when *spoiler alert* she gets beaten by her new boyfriend and eventually contracts AIDS. YES THIS IS REAL. Instead of having a movie that tackles intimate issues and complex relationships, a movie was created to scare women into locking up their sexual appetites and focus on pleasing their husbands because if you don't bad things will happen—like you'll get beat and get AIDS. WHAT?! WHAT. No.

10 Sex Truths They Don't Teach You in High School

Samantha Leal Senior Web Editor I'm Sam, the senior editor at MarieClaire.com.
Advertisement - Continue Reading Below
More From Culture
The Best Korean Dramas of All Time
Mainstream Movies With * A LOT * of Nudity
Advertisement - Continue Reading Below
Things Between Victoria F. and Chase Rice Got Ugly
Who Are the Women of 'The Bachelor' in 2020?
Rosalía Is The One To Watch At This Years Grammys
Sydney From the 'Bachelor' Knows Hannah Brown
The 10 Hottest Movies on Hulu Right Now
'The Bachelor' Has Already Finished His Season
When Michelle Carter Is Expected to Walk Free
How Much Time Did Michelle Carter Get in Prison?