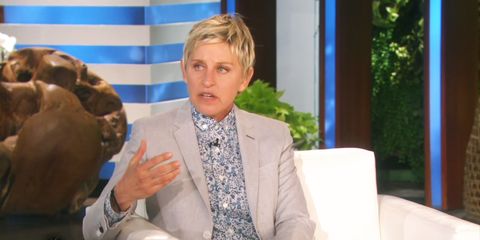 In a new interview with Transparent creator Jill Soloway, Ellen DeGeneres got real about transgender issues.

First of all, if you haven't seen Transparent, we can't be friends, but you should also know it's a show about the patriarch of a family transitioning to become a woman, and it's moving and fantastic and the lead character—played by Jeffrey Tambor—has already won a Golden Globe for his amazing performance.

So it made perfect sense that Soloway appeared on Ellen to talk about her own experiences with transitioning (her father transitioned into a woman and was the inspiration for the show).

"The reason I wanted you [on the show] is because I want people to have more compassion," DeGeneres said. "There are jokes [about Bruce Jenner] all the time and I'm hurt for him."

As Fusion points out, DeGeneres is the most watched daytime television show for women ages 25-54. Meaning this segment will reach thousands of viewers and hopefully, maybe, start to change the conversation.

Ellen, you're the best.

Watch the video below:

Laverne Cox to Host 'The T Word', a Documentary on Transgender Youth