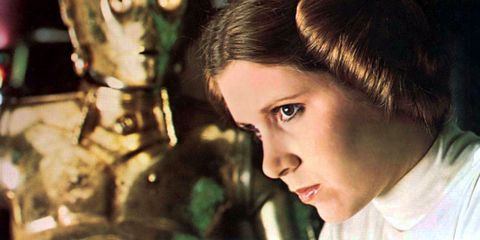 When you think of female characters from Star Wars , you pretty much come out with two: Princess Leia and Padmé. And...that's it. Until now. [Cue Star Wars opening text crawl.]

Executives at Lucasfilm have gone on the record at a Star Wars panel to say that all future movies will work hard to feature prominent female characters who are just as cool as any Jedi. As Time points out, this begins with Daisy Ridley playing Rey, the female protagonist of The Force Awakens.

Lucasfilm President Kathleen Kennedy said that the three upcoming films, as well as the spinoffs, would features "really strong women." Carrie Fisher—AKA Princess Leia—commended the remark after Kennedy spoke. "I liked being the only [woman] when I was 19," she said. "Now I need a little help."

This focus on women in the Star Wars franchise has risen significantly in the past year. When initial casting news for Star Wars: Episode VII came out—which revealed two women and 11 men—a backlash ensued. Disney, who owns Lucasfilm, quickly responded and added two more females to the cast.

Considering that there are quite a number of female Jedi historically and in the movies (they may not be human, but still), we'd love to see some women characters who are really strong, powerful, possibly human, and, you know, leads. That's kind of the important part.

Here's What Happens When 'Star Wars' Gets a Massive Fashion Makeover