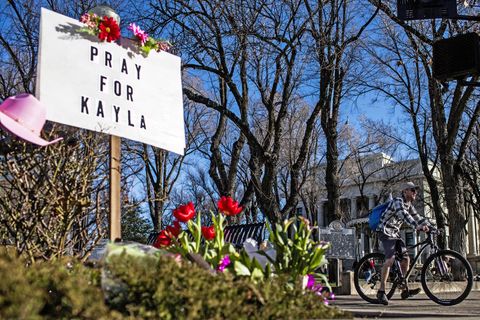 A few weeks before she disappeared, Kayla Mueller spent a warm summer day with her friend Molly Hock, swimming in the Mediterranean Sea. The two friends had met up for a visit in southern Turkey, where Mueller was living at the time, working with Syrian refugees who had fled the civil war. "She lived so close to the Syrian border, she could hear the bombs and see the smoke," Hock says. "She said she wanted to do more."

Soon after, in August of 2013, Mueller crossed into Syria to visit a hospital, accompanying a friend on a job for Doctors Without Borders. On their way back home, they were abducted by ISIS militants. Her companion was eventually released, but not Mueller. For a year and a half, her family and friends waited, hoped, and worked with officials, all while keeping her name out of the news in the hopes of bringing her home. This past February, Mueller, 26, was confirmed dead. ISIS claims she was killed by a Jordanian airstrike.

"I didn't want to believe something could happen to someone so great," says Hock, who first met Mueller at Northern Arizona University, where the two worked at a center that welcomed international students to campus. They became fast friends, moving into an apartment in Flagstaff. Mueller lived simply, Hock recalls. "She was a minimalist. She only had a few outfits. She didn't wear makeup," she says, noting that Mueller didn't even bother to buy a bed, sleeping instead on the floor. The place became a favorite crash pad for visitors from around the world, with Mueller often playing guitar while friends danced.

"Kayla taught me it's okay to be free in your skin," says Hock, 26. "I struggled with body image and food issues. She helped me to seek personal guidance and counseling." When they graduated, they each got a tattoo—an autumn leaf for Hock, to represent change, and an owl feather for Mueller. "The owl was Kayla's spirit animal. She embodied the owl," Hock says. "She had deep inner wisdom and knowledge, seeing what the world doesn't see."

Mueller and her friend Molly Hock in Turkey, just weeks before she disappeared.
Omar Alkhani

Mueller helped people across the spectrum in college, says Kathleen Day, who runs a campus ministry at Northern Arizona University. Mueller volunteered at a local prison, protested genocide in Africa, and traveled to Guatemala on a mission with the campus ministry. "It was her calling," Day says. "She maximized every opportunity she had."

Christina MacKenzie, who befriended Mueller at a student leadership retreat in Washington, D.C., for the anti-genocide group STAND, remembers the day they met. Mueller sported a "Free Tibet" patch on her bag and talked about her activism, including a Darfur rally in a snowstorm. MacKenzie's first impression: "This girl is willing to do anything to change our world's story." The two kept in touch, bonding over their advocacy work and their shared love of British musician Newton Faulkner. "She wanted to help people with her own two hands," says MacKenzie, 27. "She wanted to comfort them with her presence and say, 'I heard your cry and I came.'"

"She lived so close to the Syrian Border. She could hear the bombs and see the smoke."

After college, Mueller did humanitarian work across the globe before moving to Turkey, where she worked with aid groups including Support to Life. Her Facebook posts from over the years detailed her adventures, from India to Israel. "Freedom is an ever-evolving bird with ever-expanding wings," she wrote in a 2010 post from Tel Aviv. "Let's do it." In her final post, two months before she disappeared, she shared a snapshot of half a dozen kids, giving the peace sign. Along with the picture, she wrote one word: "Joy."

Mueller and her friend Molly Hock in Turkey, just weeks before she disappeared.
Omar Alkhani

Lyon says her niece traveled light. She recalls a time when Mueller arrived home in Arizona after a trip to Europe. Lyon met her at the airport, expecting to collect her luggage from the baggage claim. But Mueller carried only a backpack. "For Kayla, all she needed was her books, her notebooks, and her camera," says Lyon. "Through her writing and her photographs, she told a story of what was good and beautiful in the world mixed with heartbreak and suffering. I always thought that Kayla would write a book one day, and I guess in a way she is telling her story to the world, just not in the way that we expected."

The family was in "a state of shock and disbelief" when Mueller was taken, says Lyon. "When you hear stories like this, your heart breaks for those families going through it, but you never in a million years think it will ever happen to someone in your family. When it does, there are no real words to adequately describe how you feel. We couldn't tell anyone, so we had to rely on each other," she says. "Our family is very strong. We care for each other deeply." The family has started a nonprofit foundation, Kayla's Hands, to help support the humanitarian groups that were important to Mueller.

Mueller managed to send letters home from captivity, with the help of hostages who were set free. Lyon describes the notes as "her last selfless act: a wonderful, unexpected, special gift sent to her mom, her dad, and her brother." The letters were "a little piece of Kayla, something she physically touched and had written in her own words and in her own handwriting," says Lyon. "She sent these letters to basically say, 'Don't worry, Mom and Dad. I'm okay. And I am thinking about you every hour of every day, even in my dreams.' She was trying to ease their fears and their pain. These letters were the ultimate love letters. For one brief moment, she didn't want them to think of her in a prison going through this unimaginable ordeal. Kayla wanted them to reread the letters over and over again so they could find some peace."

These Remarkable Women Are Fighting ISIS. It's Time You Know Who They Are

What It's Like Being a Woman On the Front Lines

#BringBackOurGirls: What You Need to Know About the Nigerian Kidnappings