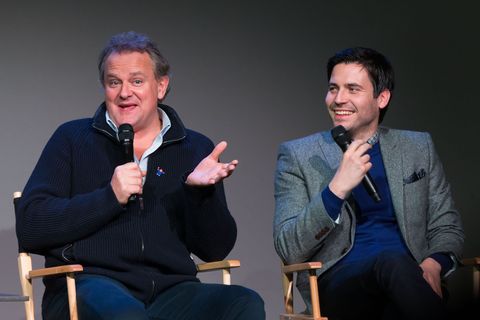 After dropping a non-hint about Downton Abbey: The Movie, Julian Fellowes left us alone to wallow, which is a scientifically sound way of dealing with TV shows ending after six sometimes-cringe-y, sometimes-brilliant seasons.

But then Masterpiece released this mean video of key cast members wishing nice things would happen to their characters.

Lord Grantham would like to pull a Don Draper and whisk his wife away to the French Riviera whilst shouting, "Stuff the estate, stuff the children, stuff all the problems!" Lady Edith basically becomes Nellie Bly. Mrs. Hughes involves herself in the putting-out system (don't tell her about the Industrial Revolution, guys). And poor, misunderstood Thomas ends up with the love of his life, even though they have to keep it a secret.

Right in the feels, Masterpiece. Right. In. The. Feels.